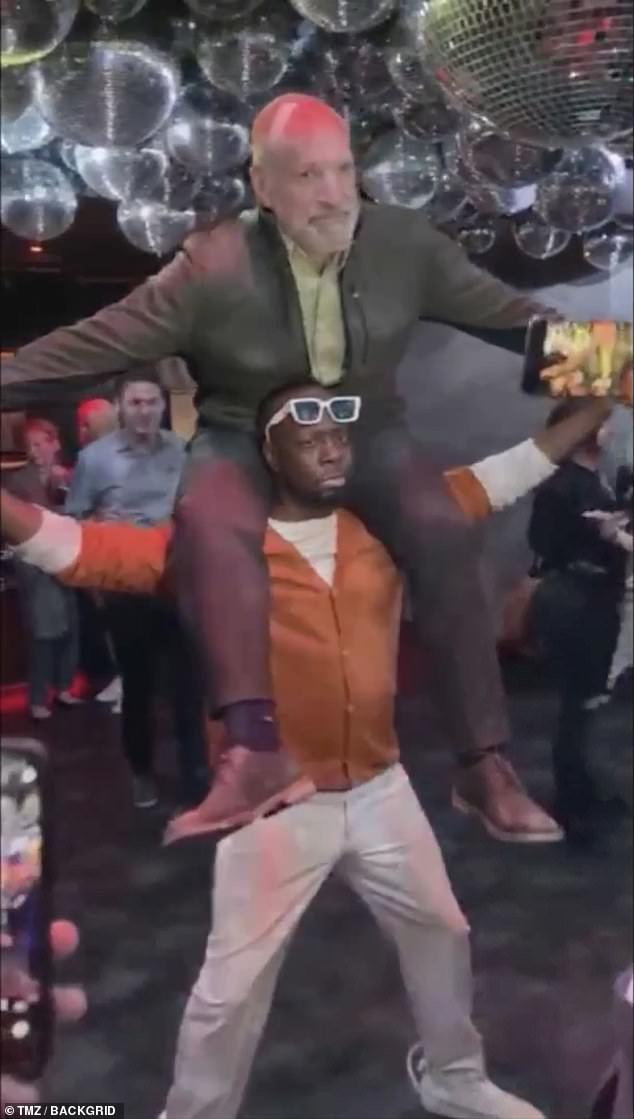 Strangest thing you’ll see all week: Wyclef Jean drops Land Rover CEO on his head after hoisting him on his shoulders at VERY rowdy party

By Alyssa Guzman For Dailymail.Com


The moment Haitian rapper Wyclef Jean dropped the Land Rover CEO on his head after carrying him on his shoulders at a rowdy after-party was captured on video.

Jean, 52, on Tuesday attended the Range Rover Leadership Summit after-party – an event where Jaguar Land Rover North America announced its new products. He was hired as entertainment for the Tuesday event.

It is unclear why the luxury car CEO climbed onto the rapper’s shoulders, but Eberhardt excitedly smiled once settled there.

Jean, wearing an orange sweater and white sunglasses, is seen in the video standing calmly with Eberhardt on his shoulders, arms spread wide and holding onto the CEO’s wrists. He spins around, showing off his strength, then seems to lose his balance, and he and Eberhardt fall to the floor.

Eberhardt looked a little shaken up following the fall, where he landed head-first on the ground

The Fugees singer seems to collapse at the waist, folding inward as the well-dressed Eberhardt tumbles head-first off his shoulders onto the floor of the Academy Museum of Motion Pictures in Los Angeles.

Eberhardt stays on the ground stunned for a moment as Jean cradles his shoulders, appearing to ask if he’s okay.

A crowd of people attended to Eberhardt after Jean hoisted him back onto his feet. A man in a gray sweater patted his cheek with a towel. TMZ reported that he left the event early and may have suffered minor injuries

Jean hoists Eberhardt off the ground and a crowd of people surround the CEO. A man in a gray sweater pats his face with a towel as a woman wraps a support arm around his waist.

TMZ reported that Eberhardt left the event early and may have suffered minor injuries.

Jean is best known for being a part of the hip-hop group the Fugees, which formed in the early 1990s, short for ‘refugees.’ The American group hit it big with the release of its second album, The Score, which sold 22million copies, making it the current best selling hip-hop album  ever. The band has not performed together in about 15 years.

Eberhardt became the CEO of Jaguar Land Rover North America in 2013. The British company’s brand is popular among the world’s richest, such as Kylie Jenner.