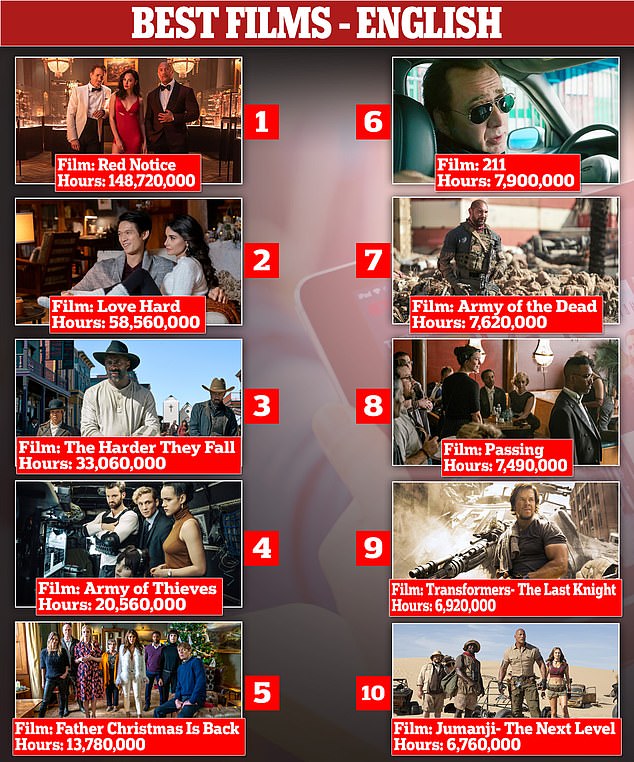 Squid Game has emerged as Netflix’s most-watched TV show or film ever after the streaming service rolled out a new website today measuring viewing figures in a bid to provide greater transparency.

14 years of secrecy have come to an end with the launch of the metrics website Netflix Top 10, which shows Netflix’s most popular TV shows and films both globally and in more than 90 individual countries.

And sitting comfortably at the top of the company’s list is the Korean sensation Squid Game.

The first season of the show had 1.6 billion hours viewed within the first 28 days of having been released – and has so far spent nine weeks in the top 10 shows on Netflix.

Netflix’s new website outlines their top films and TV shows of the past week. For example, the top films in English between November 8 – 14 can be seen above – including Netflix’s record-breaking Red Notice (top left)

Meanwhile, above are the most viewed TV shows in English from between November 8 – 14, with Narcos: Mexico Season 3 (top left) securing the top spot in the week with 50,290,000 hours of viewing

Pictured: The top TV non-English TV shows and how many hours of viewing they secured within their first 28 days, including the Korean sensation Squid Game (top left) which was viewed 1,650,450,000 hours

Elsewhere, according to the streaming service’s new metric, ‘Red Notice,’ starring Dwayne Johnson, Gal Gadot and Ryan Reynolds, has been watched for 148.7 million hours globally since it debuted November 12 on Netflix.

The staggering viewing figures meant the film secured the biggest opening weekend ever for the streaming service.

And in the past week, the most popular series was season three of ‘Narcos: Mexico,’ with 50.3 million hours viewed.

Netflix has traditionally been reluctant to release its viewing figures since beginning streaming in 2007.

Netflix subscribers have been eager to see full viewing figures over the years, so that they can compare the streaming platform’s big hits with those from traditional broadcasters.

Speaking in 2019, Scott Stuber, Netflix’s head of original films, told the Hollywood Reporter that secrecy of its viewing figures in ingrained in the company’s DNA.

He explained: ‘It was for television creators to get out of ratings and Standards and Practices and actually free up their narrative form so that they could tell stories that weren’t [influenced] night after night by those numbers. So the methodology was right. And now, as we have grown … we are used to it.’

Every Tuesday, Netflix will update the site with the top 10 series and films on the streaming service.

Until now, Netflix has been selective in sharing viewership data. It has occasionally shared views for hits, and it logs a top 10 list, without data, on the service, itself.

Though the hours-viewed metric replaces Netflix’s previous ‘views,’ which could count just a few minutes of a movie or series. Other major streaming services, like Amazon Prime Video and Disney+, don’t regularly release viewership data.

Netflix’s metrics still don’t say how many people actually watched something on the service, and it doesn’t include films or series that fall outside of its top 10. But it’s the most transparent measurement so far embraced by Netflix.

‘This is an important step forward for Netflix, the creators we work with and our members,’ Pablo Perez De Rosso, a vice president for content strategy at Netflix, wrote in a blog post Tuesday. ‘People want to understand what success means in a streaming world, and these lists offer the clearest answer to that question in our industry.’

The company said that it has hired the accounting firm EY to audit its figures.

At its current rate, ‘Red Notice’ – which received largely poor reviews from critics – could become Netflix’s most popular film ever. That title currently is held by the 2018 Sandra Bullock thriller ‘Bird Box,’ with 282 million hours viewed.

In the past week, the most popular series was season three of ‘Narcos: Mexico,’ with 50.3 million hours viewed. Pictured: Scoot McNairy, who plays Walt Breslin in the show, is seen in character during an episode