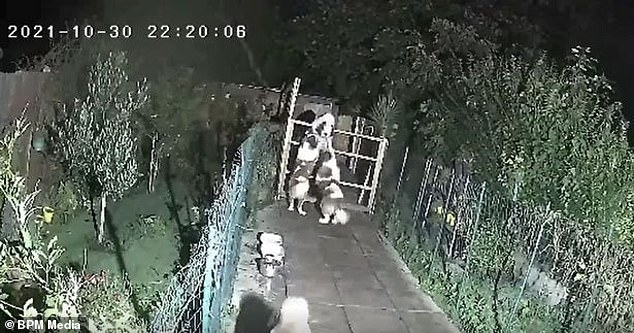 
CCTV footage has captured the extraordinary moment a group of St Bernards helped their brother over a six-foot fence to escape his enclosure.

Two-year-old Roman is initially separated from his siblings behind a tall gate, before he attempts to scale the fence himself with little hesitation.

Upon seeing their brother near the top of the gate, four more St Bernards – named Lilia, Zvezda, Evita and Falkor – rush to Roman’s rescue and help him descend the railing.

Owner George Piciorus, 42, was shocked when he watched the incident unfold while reviewing CCTV of his garden.

Roman is the oldest of the group and is described as the alpha male with his own private kennel.

However, Mr Piciorus has since found that Roman will regularly mount the gate to escape without assistance.

Footage has also shown that the five St Bernards will together to help him back to his private kennel.

Owner George Piciorus pictured with his St Bernards at his home in Oldbury, near Birmingham

Their owner, from Oldbury near Birmingham, has now been left with no choice but to buy a bigger fence to keep Roman away from the ready for when they come into season.

For the meantime, he has had to remove the gate to prevent Roman from potentially injuring himself during another daring escape attempt.

He told BirminghamLive: ‘They are very smart but stubborn. A Saint will do what he wants, when he wants, if he wants. They are very powerful and kind dogs.

The five siblings were eventually reunited, much to the surprise of owner George Piciorus

‘They all have a great temperament, and they are protective and territorial. Sometimes the others help him get back over if they want to get rid of him.’

‘It’s only in their nature to help each other whenever they need it. They have a great bond.’

Roman’s sisters, Zvezda and Evita, have been entered for Crufts 2022.