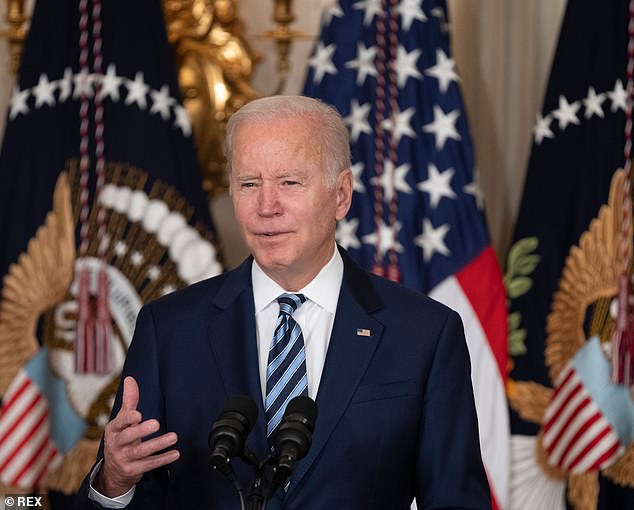 
In a troubling sign for Democrats, President Joe Biden’s approval rating dropped to 36 per cent in a new poll out Thursday and most voters said they want to see Republicans take control of Congress.

The new numbers – from a Quinnipiac University Poll – indicate a level of frustration among voters with the party in power as the country prepares for next year’s midterm election.

Only 36 per cent in the poll approved of the job President Biden is doing while 53 per cent disapproved. It’s the lowest job approval rating he’s received in a Quinnipiac University poll.

In a troubling sign for Democrats, President Joe Biden’s approval rating dropped to 36 per cent in a new Quinnipiac University poll

Additionally, a slight majority of Americans – 52 per cent – said the Democratic Party has moved to the left.

Historically, the president’s party tends to do badly in the first midterms after they take office. Both Barack Obama and Donald Trump saw their respective parties lose control of the House of Representatives in their first midterms – 2010 and 2018.

Republicans only need to win four House seats to take control of the lower chamber of Congress.

And 15 House Democrats have already announced their retirement or a run for another office this cycle. The House is also undergoing the redistricting process, which is expected to favor Republicans.

The Senate is an even 50-50 split but most of the competitive races are in states Biden carried in the 2020 election, which is keeping Democratic hopes up.

But their loss in Virginia’s gubenatorial campaign this month – where Democrat Terry McAuliffe fell to Republican Glenn Youngkin – has Republican hopes rising they can take control of Congress next year.

Republicans hadn’t won statewide in Virginia since 2009. That year Bob McDonnell was able to capitalize on a backlash against Barack Obama’s presidential win to take the state. His victory preceded a GOP wave that gave Republicans control of the House in the 2010 midterms.