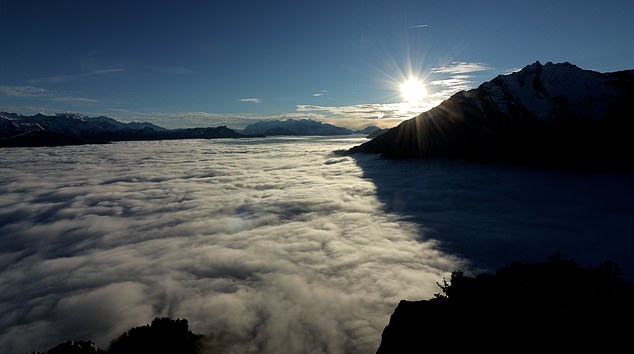 Sea or sky? Clouds swirl like ocean waves in hypnotic time-lapse video filmed thousands of feet up in the Swiss Alps


Clouds look like ocean waves in spectacular time-lapse footage filmed from a mountaintop in the Swiss Alps.

The mind-bending footage by Olivier Staiger shows low-lying stratus clouds spreading across the valley below the Scex-Riond peak.

In the high-resolution video the horizontal layers of moisture-filled air ebb and flow like the sea, against the peaks, which include the 14,154ft (4,314m) Grand Combin mountain near Switzerland’s southern border with Italy.

The video was created by the adventurous photographer using a timelapse mode on his Canon camera which took one image every three seconds.

Mr Staiger prides himself on being a thrillseeker, claiming on his Twitter profile to be a Northern Lights guide, stormchaser and eclipse chaser.

The camera is pointed south across Valais towards Italy and the famous Mount Blanc and Matterhorn peaks can be seen in the distance.

The type of cloud in these pictures is a stratus which are characterised by horizontal layers.

Some call these clouds ‘high fog’ because of their hazy appearance.

The time-lapse shows the clouds cresting like waves over a number of hours with the breath-taking backdrop of the Swiss Alps, including Mont Blanc, the Matterhorn with the lesser known Grand Combin (centre background) seen from Scex-Riond

Stratus clouds can often produce a light drizzle or snow and a typically ‘cloudy day’ is generally made up of these types of cloud.

They are essentially above-ground fog formed either through the lifting of morning fog or when cold air moves at low altitudes over a region.