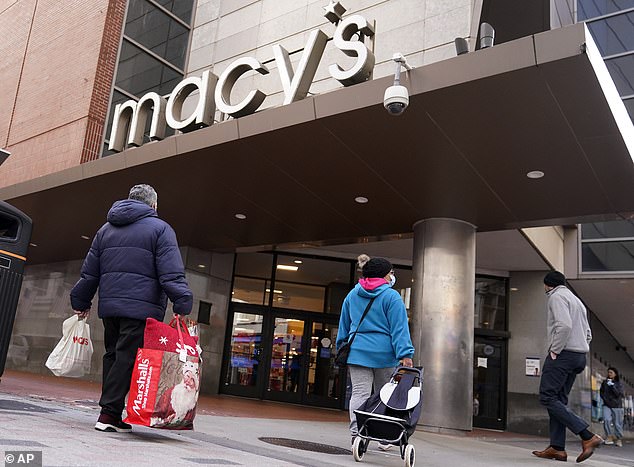 Macy’s is asking corporate staff to pull shifts in its department stores during the busy holiday season – but the company insists it is a standard practice unrelated to the dire national labor shortage.

Macy’s sent an email on Tuesday to corporate workers asking them to ‘lend a helping hand’ in stores by folding clothes, clearing dressing rooms and stocking shelves as ‘Experience Elevation Elves,’ the Washington Post reported.

A Macy’s spokeswoman told DailyMail.com that the appeal is an ‘annual tradition’ unrelated to labor issues, even as the retail industry grapples with a shortfall of more than 1 million workers ahead of Black Friday.

‘For decades our corporate team has assisted colleagues in our stores during the holiday season,’ the spokeswoman said.

‘Just like the Macy’s Thanksgiving Day Parade, this is an annual tradition that builds camaraderie and is part of making the holiday shopping experience for our customers special,’ she added.

A Macy’s curbside pickup sign is seen in New York this month, as Americans begin their holiday shopping early this year in an effort to avoid shortages of some goods

During the holiday season, Macy’s corporate staff are being encouraged to volunteer for up to three 9am to 5pm shifts in Macy’s stores under the program.

The holiday period is crucial to retailers, and for Macy’s accounted for 40 percent of the company’s annual sales in 2020.

But the industry, like others, is grappling with a shortage of workers. In September, the retail sector had 1.12 million unfilled job openings, up from 670,000 the prior year.

Macy’s previously said it hopes to fill 76,000 positions ahead of the holidays at its Macy’s, Bloomingdale’s and Bluemercury stores, as well as call centers and warehouses.

Macy’s has already launched several waves of pre-Black Friday promotions for the season, joining other retailers as Americans rush to beat potential shortages.

The holiday period is crucial to retailers, and for Macy’s accounted for 40 percent of the company’s annual sales in 2020

Macy’s has already launched several waves of pre-Black Friday promotions for the season. Retailers have been pushing deals earlier this year to cater to early shoppers

Many retailers have been pushing their deals earlier than ever this year, in part to cater to shoppers who are anxious to secure their Christmas gifts amid fears of shortages and rising prices.

On Thursday, Macy’s stock soared 22 percent as the company raised its full-year sales and profit outlook, signaling the retailer has sidestepped supply chain snarls and is well stocked ahead of Black Friday.

The retail sector has faced pressure this year including shipping logjams, a trucker shortage, shuttered factories in Asia and a scarcity of raw materials, leading companies like Nike to warn of product shortages during the holiday season.

But moves by Macy’s to expedite shipments and make product orders earlier in the year helped it boost inventory levels 19.4 percent in the quarter ended September.

On Thursday, Macy’s stock soared 22 percent as the company raised its full-year outlook

Moves by Macy’s to expedite shipments and make product orders earlier in the year helped it boost inventory levels 19.4 percent in the quarter ended September

‘The company implemented several measures to mitigate supply chain disruptions and does not expect to be materially impacted during the fourth quarter of 2021,’ it said in a statement.

‘I don’t think that all supply chain problems have been fixed, but Macy’s raised guidance could put people at ease that there will be enough product,’ Empire Financial Research analyst Berna Barshay told Reuters.

That compares favorably to other retailers including Target and Walmart, which saw their gross margins fall for the quarter amid higher costs for goods and labor.