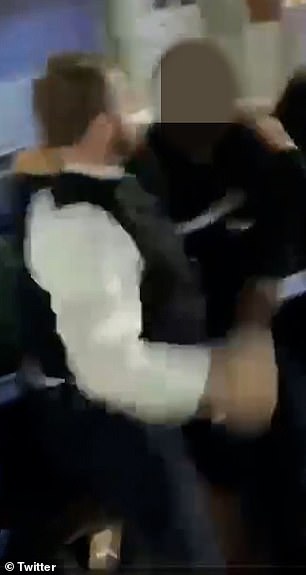 A Met police officer who was filmed apparently punching a black schoolboy in the face will not face gross misconduct proceedings after an investigation by the police watchdog.

The Independent Office for Police Conduct launched a six-month probe after the incident in Tottenham in December last year.

Six police officers were on foot patrol on December 8 and, due to reports of knife-point robberies in the area, they approached a group of Black teenage boys standing near to the gates of Park View School in West Green Road.

The 16-year-old boy was selected for a stop and search by the police officers and the incident escalated when one officer attempted to handcuff a boy. He will now face a misconduct hearing.

A 20-second video clip – which was widely-shared online – shows another officer swinging his arm towards a boy after which they both end up on the floor.

During the video, onlookers can be heard screaming ‘please’ and ‘record this’ as the scuffle ensued.

The officer was filmed appearing to punch a black school boy during a stop and search in Tottenham, north London. But he will not face any misconduct charges with the Met Police

At the time, the Met Police said three officers suffered injuries during the stop-and-search and four 16-year-old boys were arrested. They also referred themselves to the IOPC.

The force said two of its officers had been hospitalised after the incident and that the boy suffered ‘facial injuries’.

The footage prompted a Black Lives Matter protest on Tottenham High Road the day after the event, where about 100 protestors marched into the local police station chanting and holding placards.

The IOPC said a second officer who was involved in a stop and search incident earlier on in the incident which happened directly outside a school will have a case to answer for gross misconduct for breaching the standards of professional behaviour for use of force and duties and responsibilities.

In his case, a spokesman added: ‘It is alleged that the use of force was not necessary, reasonable or proportionate in the circumstances and that there were not reasonable grounds for searching the boy. It will be for the force to organise a hearing in due course.

‘It was also our opinion that the officer’s attitude towards the boy could have been considered disrespectful.

At one point during the 20-second clip (pictured), which was widely shared on social media, the officer can be seen swinging his arm towards the boy and they both end up on the floor

‘We considered whether race and age bias was a factor in the officer’s decision making and could not rule this out although there was no evidence of overt racism.’

In the second officer’s case, the watchdog’s investigators said that he did not attempt to de-escalate the situation and responded to taunts from the teenagers with unprofessional language that could be considered inflammatory.

They recommended that his actions required improvement and should be addressed through ‘reflective practice’.

IOPC Regional Director Sal Naseem said: ‘Police use of force is an area of serious concern for our communities and we recognise the potential for incidents like this to damage public confidence in the police.

‘It will now be a matter for the police disciplinary panel, to determine whether the allegations are proven.’

Superintendent Simon Crick, in charge of policing in Haringey, said: ‘Video footage of part of this incident was widely shared on social media at the time and I know the significant level of concern this incident caused within the local community.

‘We have fully co-operated with the IOPC investigation from the outset after referring two public complaints and two conduct matters shortly after it happened.

‘We note the IOPC have directed that the a gross misconduct hearing should be held and this will be chaired by an independent and legally qualified chair.

‘Whilst it is clear that one of the officers involved in this case has questions to answer about his conduct, it should not be forgotten that three officers were also injured, including two that required hospital treatment.

‘I ask my officers to do a very difficult job in often very challenging circumstances, and they must at all times act with professionalism, dignity and respect if they are to maintain the confidence of the communities they serve.

‘Community confidence in the use of stop and search powers can only be sustained if we apply them in a fair, effective and professional manner.

‘All frontline officers are equipped with body worn cameras so there is a clear and impartial record of our interactions with the public including stop and searches.

‘We continue to work closely with our communities to address local concerns around the use of stop and search.’