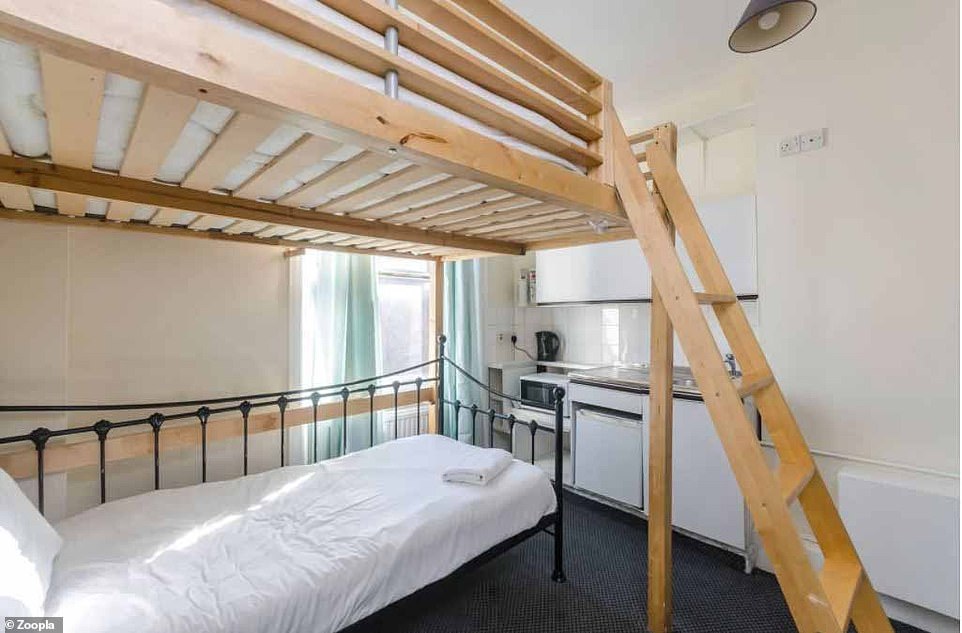 A tiny flat in West London with the kitchen and the shower just inches from one single bunk bed has gone on up for rent for £875 per month – and doesn’t even come with its own toilet.

The 12ft 9in x 10ft 9in studio apartment is described as a ‘good size living space, that is presented in neutral décor,’ by Rightmove.

The third floor apartment in Barons Court is situated near West Kensington tube station, and is said to be close to ‘good amenities’.

Where’s the loo? A tiny west London studio flat with kitchen and a shower just inches away from a bunk bed (but no sign of a toilet) is up for rent at £875 per month

The third floor flat is located in Barons Court on Castletown Road, near Fulham and West Kensington

It requires no deposit and is available for long-let.

The floor plan shows a bunk bed inches away from a small kitchenette, allowing the resident to literally step out of bed to make breakfast.

The bottom bunk could act as a sofa in the small living area, although no other space is available.

Pictures show a shower within the studio but it is not clear where the toilet is and there is also no bathroom door.

A floor plan shows the limited space within the flat, the door opens directly to a bunk bed with a small kitchenette in the top right space. A shower is situated in the bottom right corner of the studio.

The flat is on the third floor of a building on Castletown Road, not far from Fulham.

Rightmove features two other properties in the same ‘wonderful brick-built building’. A studio flat on the lower ground floor has access to a back patio area, and is the market for £1,550 per month – but again, curiously features no toilet.

Another studio flat on the ground floor of the property resembles a bedroom and is marketed at £975 per month.

A bargain studio flat of just £563 per month is located just a short walk away on Castletown Road, featuring a bed, kitchenette and shower.

Local amenities including a Michelin-starred pub called The Harwood Arms and an array of shops.  HG is the area’s award-winning butchers and there is also a wine bar, Vagabond, nearby with famed food platters.

Small properties with large price tags are a regular occurence in the capital. In March, a tiny studio flat in Belsize Park – which didn’t even have a bed – was on the market for a £900-a-month.

Inside the flat in Belsize Park, which measures 22ft by 10ft, the owner crammed in a kitchen, with sink and microwave as well as a sofa

The miniscule apartment is even smaller than the six-yard box on a football pitch. However, the estate agent described the tiny, furnished property as ‘fantastic’.

And in Russia Dock Woodland – just opposite the Thames from Canary Wharf – a one-bedroom flat with an oven yards from the bed was marketed for couples at almost £1,000 a month in February.

The studio-style property has a double bed, kitchen and wardrobe all crammed into a single small room.

The little one bedroom flat in Russia Dock Woodland has a kitchen and bedroom crammed inside a single room, with the oven just a short hop from the bed

Would-be renters were left aghast that the flat was valued at £950-a-month to rent. Twitter user Gigibee said: ‘Housing in London is just a joke.’

Emma Jones commented: ‘You can have a four-bed house with off road parking and a garage for that where I live.’

Morris wrote: ‘The idea that you basically have to spend a grand a month to wake up in your kitchen really stresses me out. This city man.’

In August, one of Britain’s tiniest flats sold for an eye-watering £325,000 – despite being the size of a garden shed.

The tenth-floor apartment in central London measured just 143sq ft, and is just a stone’s throw away from Harrods and Harvey Nichols in the exclusive borough of Knightsbridge.

A tiny apartment in Princes Court (pictured) in Knightsbridge, overlooking Harrods and Harvey Nichols, sold for £325,000 earlier this year

Directly opposite the bed, a shelf attached to the back of the kitchenette could ‘be used as a dining table if stools are place underneath it’

The sale of the ‘micro-penthouse’ in Princes Court, on the Brompton Road, equated to £2,272 per sq ft – making it one of the priciest ever sales in London.

The apartment was described as ideal for ‘staff’ who may work for a super-rich family with a bigger apartment in the same building.

See the listing on Rightmove here.