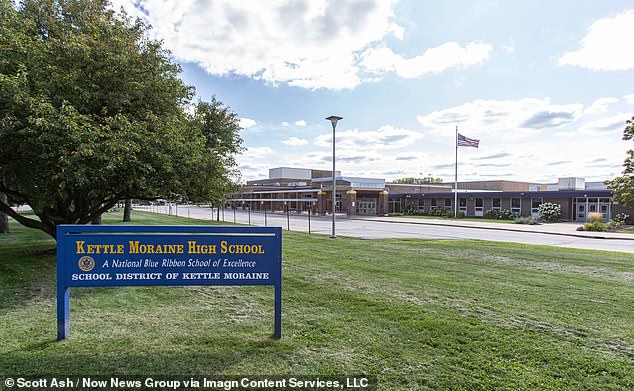 A pair of parents has sued a Wisconsin school district over its gender pronoun policy, which allows students to change their preference at school without parental consent, after they sent a letter in May expressing concerns.

The parents of a 12-year-old girl have sued the Kettle Moraine School District after they say they were forced to pull their daughter out of school to ‘protect her mental health and preserve their parental role’ after the girl asked teachers to use male pronouns without their consent.

The parents filed the lawsuit on Wednesday along with another set of parents – whose identities are blacked out in the suit – who said they did not want the same thing to happen to their child.

The unnamed parents claim in the suit against the district that the school violated the constitutional right of every parent to raise their children by ‘undermining and overriding’ their decision-making role.

‘The parents in this case know and love their daughter and are doing their best to get her the expert care she needs in her battle with anxiety and depression. We are asking the court to respect the serious concerns of these parents by ensuring Kettle Moraine School District swiftly changes its policy that is undermining parents and harming children,’ Kate Anderson, director of the Alliance Defending Freedom’s (ADF’s) Center for Parental Rights, said in a statement.

The ADF, which is representing the parents, is a nonprofit faith-based group that says it’s committed to ‘protecting religious freedom, free speech, marriage and family, parental rights, and the sanctity of life.’

According to Anderson, before filing the suit, attorneys for the parents wrote a letter to the school district in May of this year expressing concerns and asked officials to change the policy to require parental consent – but the district did not respond to the letter, ‘leaving the parents with no choice but to file suit.’

In their suit, the parents claim the school violated the constitutional right of every parent to raise their children by ‘undermining and overriding’ their decision-making role

In the letter, dated May 18, 2021, the parents said that in December 2020, their 12-year-old was experiencing ‘rapid onset gender dysphoria, along with significant anxiety and depression,’ and they withdrew her from school to attend a mental health center where they affirmed their daughter was transgender and encouraged her to transition to male.

In January, the 12-year-old expressed the desire to adopt a male name and pronouns when she returned to school despite her parent’s objections that they say they communicated with the school by asking that teachers and personnel continue to refer to their daughter by her legal name and use female pronouns, the letter states.

But according to the parents, the district ‘refused to honor’ their request and said that because of district policy, they would address their daughter by a male name and pronouns if that is what she wanted.

The lawsuit this week is one example of parental outrage across the country over school gender identity policies.

Earlier this month, a New Hampshire student-athlete and his mother sued their school district after he was suspended from a football game for expressing his view that there are ‘only two genders.’

The lawsuit filed on November 4 in Rockingham Superior Court, and obtained by DailyMail.com, said that the one-game suspension of the student in September was in violation of the student’s constitutional right to free speech and the New Hampshire Bill of Rights because he expressed his religious Catholic beliefs.

They believe the school district policy essentially penalizes students for their religious beliefs when they refuse to address non-binary students with their chosen pronouns to describe their gender identity.

‘The student does not deny that he violated the Gender Nonconforming Students policy,’ the lawsuit states. ‘He in fact denied, and will continue to deny, that any person can belong to a gender other than that of “male“ or “female.“’

The high school enacted a progressive policy in 2016 whereby a ‘student has the right to be addressed by a name and pronoun that corresponds to the student’s gender identity.’

But the policy also contains a provision that the ‘the intentional or persistent refusal to respect a student’s gender identity is a violation of this policy.’