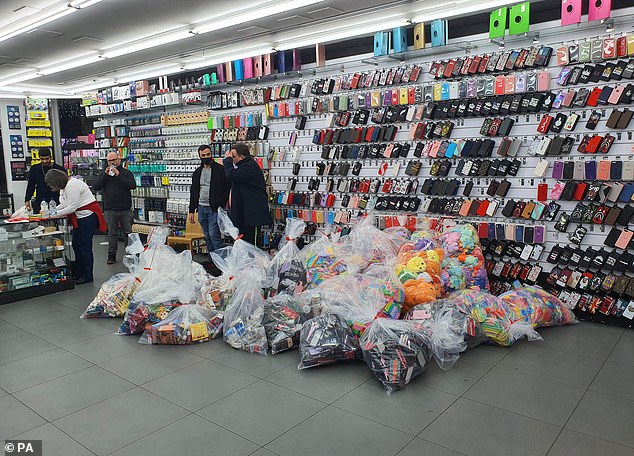 More than 17,500 items were confiscated by Trading Standards from shops on Oxford Street, London, in a single day.

The multi-agency Operation Jade saw four souvenir and sweet shops raided on Thursday night in the famous central London street, which has around 300 shops.

Heather Acton, Westminster City Council’s cabinet member for communities and regeneration said: ‘Oxford Street is the nation’s high street, our shoppers should be able to trust the products they are buying in the city are as described “on the tin”.

Authorities confiscated more than 17,500 knock-off designer goods and illegal items from shops on Oxford Street, London, in a single day on Thursday

‘The quantity and variety of goods seized by our officers is astonishing. Many of these goods are unsafe and certainly unhealthy.

‘From cheap imitations of fashionable products to mislabelled tobacco and even psychoactive substances it’s vital that we protect customers and get these products off the shelves.

‘This Christmas is make or break for many high street shops, and checking retailers will support legitimate businesses and protect the reputation of the West End as a leading destination for shoppers.’

Police confiscated two bags of food that had more than the allowed legal limit of THC, the main psychoactive compound in cannabis, and 4,000 items being sold by an unregistered food business operator.

Some 2,500 souvenirs were taken from unregistered businesses and illegal street traders.

It’s not the first time police have confiscated such a huge haul.

Police in Manchester seized an estimated £500million worth of fake designer goods weighing more than 200 tons from 55 storage units across Strangeways, in the north of the city, in September.

Among the assortment of items were suspected counterfeit shoes, clothing, handbags, watches, makeup, sunglasses and headphones.

Fake brand labels, which are often imported separately to be sewn onto the counterfeit clothing and shoes, were also recovered.

Two counterfeit perfume factories were also found as well as the chemicals used to create the fake fragrances.