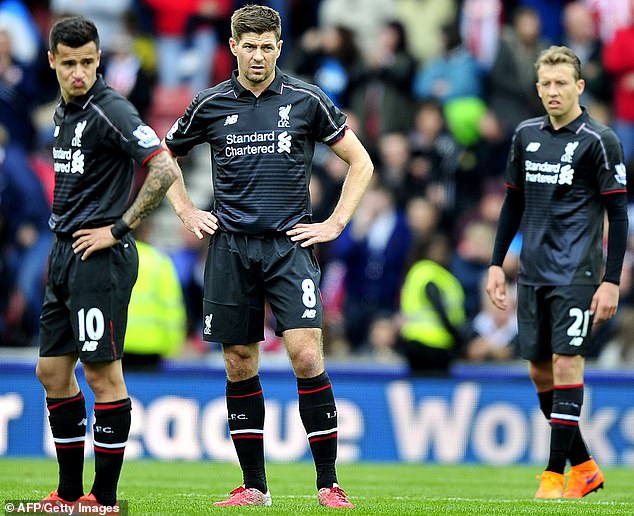 Along with famous and magnificent successes, Steven Gerrard endured tough moments during his exhilarating playing career at Liverpool.

His final game, at Stoke on May 24 2015, is right up there with the most humiliating. A chastening 6-1 defeat – where Gerrard scored Liverpool’s solitary goal – left Brendan Rodgers fortunate to keep his job at the end of an underwhelming season.

Gerrard, now in charge of Aston Villa, will be hoping for a better day this weekend when he manages his first game in the Premier League against Brighton. However, looking back on that dark May day, what have Gerrard’s team-mates been up to since then – and where are they now?

Six years on from that defeat, Gerrard is back in the Premier League as manager of Aston Villa

This was one of Mignolet’s worst days too as a Liverpool player – he did not conceded more goals than this in one game for the club.

After being ousted as the club’s No 1 by Loris Karius in 2017-18, the Belgian was a clear No 2 behind Alisson when Jurgen Klopp’s side won the Champions League.

He then moved on to Club Brugge in his homeland in 2019 for £6.4m, where he is the No 1 and he still features regularly in the Belgium squad.

Simon Mignolet is now the No 1 at Belgian side Club Brugge, who are in the Champions League

The German, out of position at right back during that fateful day against the Potters, stayed at Liverpool for three more years and was a regular during the early years under Klopp.

However, he refused to sign a new contract, with his last appearance coming in the 2018 Champions League final defeat to Real Madrid.

He moved to Juventus, where he stayed for a year and a half before he joined Borussia Dortmund on loan – he signed permanently in the summer of 2020.

The intimidating Slovakian centre back was a regular under Rodgers and played here and there under Klopp in his first season, before he was sold in the summer of 2016 to Fenerbache for £5m after eight years on Merseyside.

Since then, he had a three-week period at Atalanta in 2019 where he failed to adapt to his new surroundings and was released from his contract, before he joined Turkish club Istanbul Basaksehir.

Now 36, he has returned to play his club football in Slovakia after 17 years abroad, at Spartak Trnava.

Martin Skrtel moved to Fenerbache, then Istanbul Basaksehir, before returning to Slovakia

The Frenchman signed a new deal just a few weeks before Brendan Rodgers was sacked, but the centre back fell out of favour under Klopp during the 2016 pre-season tour of the United States.

After being late for the flight and a team meal, Klopp sent him home. He never recovered and a loan move to Crystal Palace was then made permanent in 2017.

Mamodou Sakho (left) is now at Montpellier, after falling out of favour at Liverpool and Palace

Yet Sakho eventually fell down the pecking order at Selhurst Park too and upon the expiration of his contract at the end of last season, he joined Ligue 1 club Montpellier on a free transfer.

The Spaniard stayed at Anfield for four more years after the Stoke humiliation, and was Klopp’s No 1 choice at left back in his first season.

But he was usurped by James Milner, and then Andy Robertson, before leaving on a free transfer to Villarreal after the 2019 Champions League triumph.

A firm fan favourite, Lucas was used as a versatile player in Klopp’s first few seasons.

However, after 10 years at the club, he departed in 2017 for Lazio for £5m and was named the club’s player of the year in the same season.

Now 34, he is still a regular in the team at the Rome-based Serie A club.

A popular figure on Merseyside, Lucas Leiva moved to Lazio in 2017 and is a regular starter

The current Liverpool captain is the only player from this game still playing at the club.

In fact, this was his final game before he was named the permanent skipper following Gerrard’s departure.

It’s fair to say things have been on an upward trajectory ever since for the European Cup and Premier League-winning leader Henderson.

The scene of that disastrous day is now where Joe Allen plays his club football, having joined Stoke in 2016 for £13m.

That was off the back of being named in UEFA’s Team of the Tournament for his performances at Euro 2016.

Nevertheless, Klopp decided to sell the Welshman, who is now club captain at the Bet365 Stadium.

The Brazilian developed into Liverpool’s star player after Gerrard’s departure and as the Reds re-visited Stoke on the first day of the next season his long-range effort sealed a victory.

Then, in two years under Klopp, Coutinho starred in the German’s revolution but amid a willingness to move on, the playmaker joined Barcelona for an initial £105m, potentially rising to £142m.

But he has flopped so far at the Nou Camp, with his highlight being part of Bayern Munich’s treble-winning side in 2020 when he joined on loan. However, he will be part of new Barca coach Xavi’s plans in the short-term.

A popular figure in the dressing room, Lallana was used regularly by Klopp in his first few years in charge, before injuries and competition for places saw him demoted to something of a squad player.

Not that his presence wasn’t useful in a dressing room winning the biggest trophies in club football.

With the best wishes of everyone at Liverpool, he left on a free transfer to Brighton in 2020 where he is now part of Graham Potter’s over-achieving side.

Danny Ward – Never got a proper chance to show his worth at Anfield – the Wales No 1 left in 2018 for Leicester where he is still back-up to Kasper Schmeichel.

Kolo Toure – Followed Rodgers to Celtic in 2016 for a season, where he became a coach and is now part of the Northern Irishman’s backroom staff at Leicester.

Dejan Lovren – The most recent of all the departures, Lovren won the Champions League and Premier League before moving on in 2020 to Zenit Saint Petersburg.

Rickie Lambert – This was his last appearance for Liverpool, as he left for West Brom that summer. Retired in 2017 after failing to find a new club.

Raheem Sterling – Sterling did not enter the fray on this day, on an occasion where he felt the wrath of Liverpool fans pitchside. Moved to Man City for £49m that summer.

Lazar Markovic – The £20m flop winger had four loan spells away from Merseyside before he eventually left permanently for Fulham in January 2019. Now at Partizan Belgrade in his homeland.

Jordon Ibe – Moved to Bournemouth in 2016 for £15m but underwhelmed, and joined Derby in 2020. However he is now without a club and spoke in January about his struggles with depression.