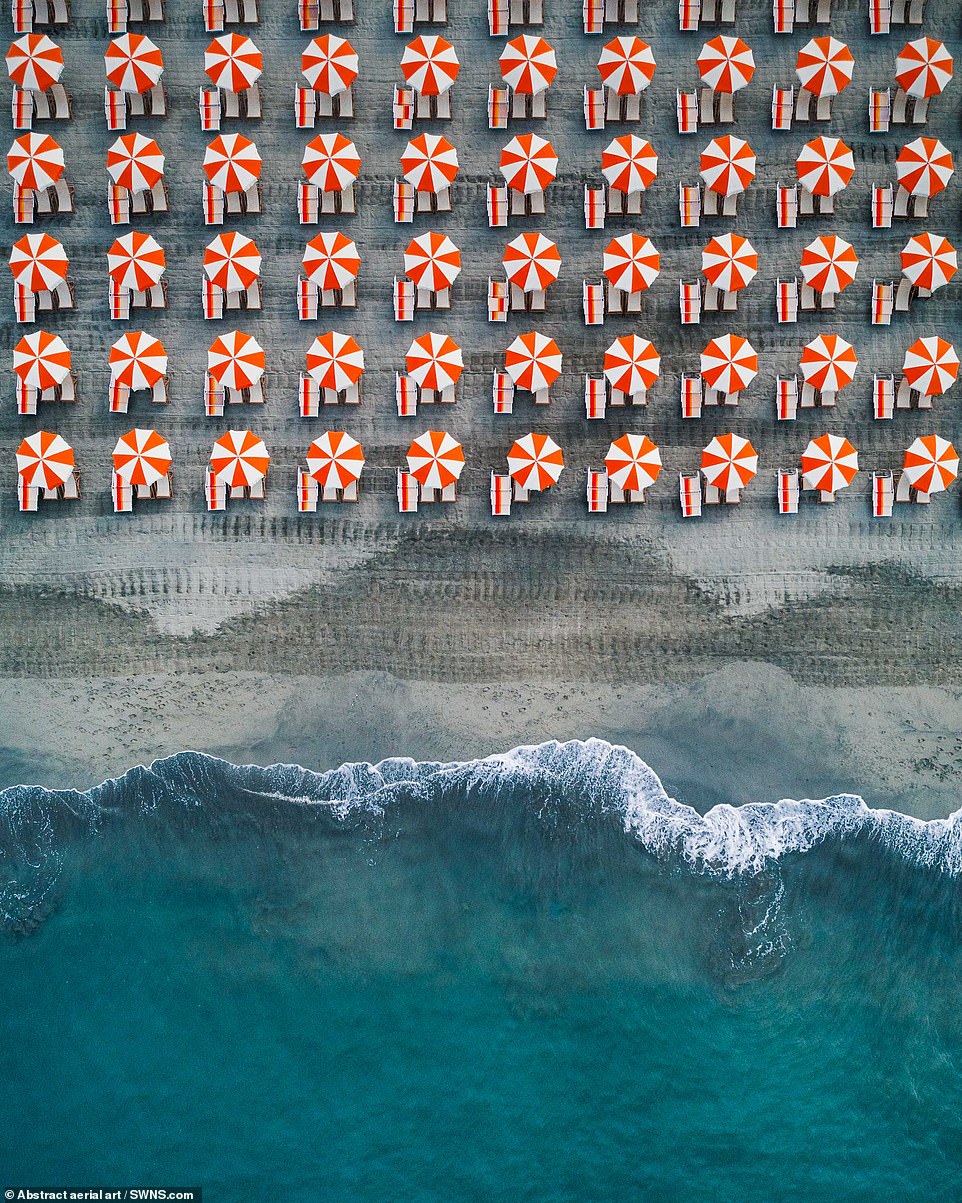 These breathtaking images show the stunning natural and man-made patterns around the world that are only visible from the air. The aerial photographs were captured via drone by two British brothers, JP and Mike Andrews, who go by the name ‘Abstract Aerial Art’. They say their work is ‘to show how weird and wonderful the world can look from above’. Click through to see the most jaw-dropping images…

Rainbow cargo: This cargo ship carrying shipping containers and casting an imposing shadow perfectly mimicking a city skyline went viral within minutes. The pair researched weather conditions, tidal patterns, shipping routes, lighting and angles to get the perfect shot. Their research paid off – the duo nailed the photo within 15 minutes.

Flower power: Shown here is a collection of kayaks resting in a French lake that seem to be forming a petal-shaped pattern. ‘Seeing our planet from this unusual perspective can turn the ordinary into something truly extraordinary,’ the photographers said.

Can you guess what this is? You’ll have to look closely to capture this photograph’s true beauty. Pictured here are rows of tulips showing the variety of colors during the spring bloom in Lisse, Netherlands.

Boat life: Here, canal barges lined up in symmetrical patterns in Warwickshire, UK. The photographers said: ‘We’ve dedicated our lives to traveling the far corners of the Earth, seeking out the most bizarre and naturally beautiful land-forms and structures to showcase the world in a way very few get to witness.’

The busy city: The brothers took their drone way up high to grab a shot of these tall skyscrapers in the densely-populated region of Mid Levels District on Hong Kong Island.

This looks like a maze! Captured here are intricate patterns created by the oyster farms situated in the marshlands in La Tremblade on the western coast of France.

Making waves! JP and Mike took their drone high up over the sea to capture a speed boat creating circular wave patterns off the coast of Monaco.

Don’t look down: Shown here is a diminishing perspective of a vast housing complex in Hong Kong with four huge courts down below. The brothers went viral after thousands of social media users debated the photograph’s authenticity.

Making me dizzy: Shown here are circular impressions left in the sand by a bright red car photographed in Gruissan in the South of France.

Who knew a crowded parking lot could be this artistic? JP and Mike captured rows of unsold vehicles on a factory car park in the north of England. ‘As beautiful as the more well-known locations are, there is just as much beauty in the landscapes and objects that are often overlooked by photographers,’ they said.

Arabian nights: The brothers captured this image of a lonely camel and its shadow crossing the Arabian desert at sunset in the United Arab Emirates. The camera even picked up the animal’s tracks in the sand.

On the road: Here is an abandoned desert road covered by windswept sand dunes in Dubai.

By the sea: Perfectly lined up chairs and umbrellas on the beach awaiting sunbathers in Massa, Italy, as the aqua-hued ocean waves wash up against the shore make for this final stunning image from the brothers.