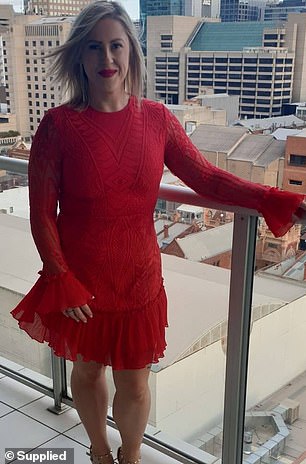 A divorcee has revealed how she lost 30kg and learned to love herself after being sucked into a vortex of self-loathing when her husband left her.

Kyla Cox, 34, from Adelaide thought she would be married with babies at 32, instead she was moving back in with her parents ‘feeling like an absolute failure’.

‘I looked at myself in the mirror and for the first time noticed how much weight I had put on, I felt disgusting and unappealing,’ she told FEMAIL.

Kyla Cox, 32, pictured here before (right) and after her 30kg weightloss has revealed how she found herself after divorce

Kyla, left, said she weighed 96kg at her heaviest and hated the ways she looked and felt

‘I told myself it was no wonder he didn’t want to be married to me anymore, that I wasn’t pretty enough to be loved, I hated myself and I lost all my confidence.’

Kyla didn’t want to leave the house and hated her appearance so much it made going out too difficult – especially if she had to go shopping for an outfit.

‘I was a size 20, the clothes were expensive and I hated them all because I hated how I looked in them, so I would only wear them once,’ she said.

But just two and a half years later Kyla is ‘feeling better than ever’ and has gone from weighing 96kg to 65kg, comfortably fitting into size ten clothes.

‘I go to the shops and head for the large, then medium before telling myself I am a small,’ she said.

‘I knew I ate too much, Friday nights we would eat a pizza and have a six pack, but I didn’t know what a serving size looked like,’ she said.

Kyla, right, says she now knows what a healthy portion size looks like and no longer overeats

So she jumped in the deep end and hasn’t looked back – but it wasn’t easy.

‘The first two weeks were the hardest, I was starving,’ she said.

‘But it taught me how much pasta I can have, what it looks like on a plate, then my stomach shrunk and it was fine.’

‘I don’t miss out on any food now – I just know when to stop. I know I can have a few pieces of chocolate where before I would smash a whole block.’

Kyla coupled the meal plan with some light exercise before eventually joining a ‘crossfit mixed with F45’ style gym.

Kyla says she is happier than ever, has bought her own house and excelled at work

This helped to keep her accountable and also increased her self confidence.

She has moved back out on her own, after buying a home, and says she is the happiest she has ever been.

‘I wake up excited to start my day and I never need coffee or energy drinks to get me gong in the morning,’ she said.

And the new feeling of calm inside her shows.

‘My friends and colleagues keep talking about how I am a completely different person now,’ she said.

Kyla is now a team leader with AGL and says she is ‘performing better at work than ever’.

She has also realised she doesn’t need to meet the expectations of her younger self to be happy.

‘I am single now, but it doesn’t matter to me like it used to.

‘And I would love to have kids one day but I don’t have to have them.’

Kyla has encouraged friends and family members through their own weight loss journeys.

‘I tell people they just have to get through the first two weeks of being tired and hungry,’ she said.

‘And I tell them I have failed and taken backwards steps too. It isn’t easy but it is worth it.

Now Kyla  is the one dragging her friends out, leading the group’s social scene.

She is working on ‘toning up’ and plans to have skin-removal surgery next year.