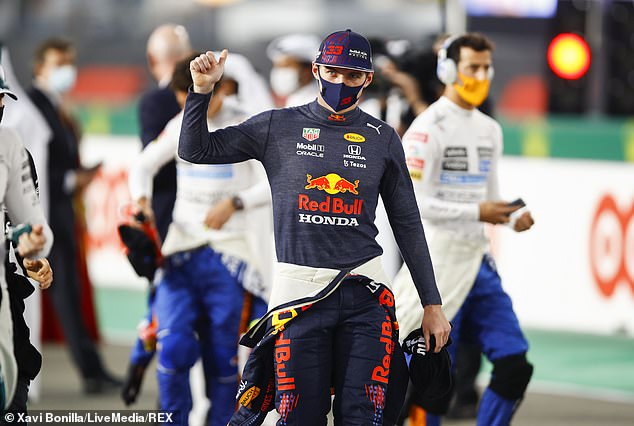 Christian Horner insists he has NO regrets over outburst that infuriated FIA and led to stewards meeting, having blamed a ‘rogue marshal’ for Max Verstappen collecting a five-place grid penalty at Qatar Grand Prix


Christian Horner has no regret over his actions at the Qatar Grand Prix as the Red Bull team boss saw Lewis Hamilton narrow the gap to championship-leader Max Verstappen.

Hamilton roared to a lights-to-flag victory in Formula One’s inaugural race in Doha, taking the Mercedes driver to within eight points of Red Bull’s Verstappen with two races to go.

The Qatar Grand Prix lacked some of the excitement of recent races on the track – but Horner and his Mercedes counterpart Toto Wolff more than made amends off it.

The pair clashed during a Thursday press conference as the news broke that Mercedes had failed in a bid to review the decision not to punish Verstappen for an incident with Hamilton a week earlier in Brazil.

Horner said he had ‘no relationship’ with Wolff, was not there to ‘kiss his a***’ and that he would not be spending Christmas with the German – unless Wolff was ‘in panto this year’.

A trackside marshal was next to face Horner’s ire after Verstappen was hit with a five-place grid penalty for not sufficiently slowing for double-waved yellow flags towards the end of qualifying.

‘It’s a rogue marshal that stuck out a flag out. He wasn’t told to do so. This is a crucial blow in the world championship,’ Horner told Sky Sports F1, and his words landed him in hot water with the FIA after he was summoned to the stewards to explain his comments.

Horner got off with an official warning and also apologised to the marshal in question and offered to participate in the 2022 FIA International Stewards Programme as a result.

But asked if his outburst showed that the pressure of a close-run title fight was getting to him, Horner said: ‘Not at all – watch the interview and make your own opinion.

‘Everyone has a right to an opinion and I gave an opinion.’

Pushed on if he regretted his recent behaviour, he added: ‘Not at all, I believe in my team, I’m a straight-talker and have always conducted myself in that manner.

‘I’m not an overly-emotional person, I don’t rant at camera and I think the way I have conducted myself, I have no issues with it and would do exactly the same.’

Verstappen finished a distant second in Doha but can be crowned world champion in Jeddah if he wins with the fastest lap and Hamilton fails to finish in the top five.

The Dutchman started seventh following his penalty in Qatar but he made light work of the rest of the field to limit the damage in his enthralling battle with Hamilton.

‘I think Max’s recovery on the first lap was stunning and his first two corners were sensational.

‘Mercedes had a quicker car with Lewis, but we were able to come back at them in the second and third stint. Whilst we haven’t got quicker, our straight-line speed was competitive and the fact that Max was able to get the fastest lap before switching to soft tyres was encouraging.

‘We are now just five points behind in the constructors’ championship and eight points in front in the drivers’ championship, so there are two very big races to come and it’s all to play for.

‘We are going to work hard next week and improve the car as much as we can and see what we can do in Jeddah.’