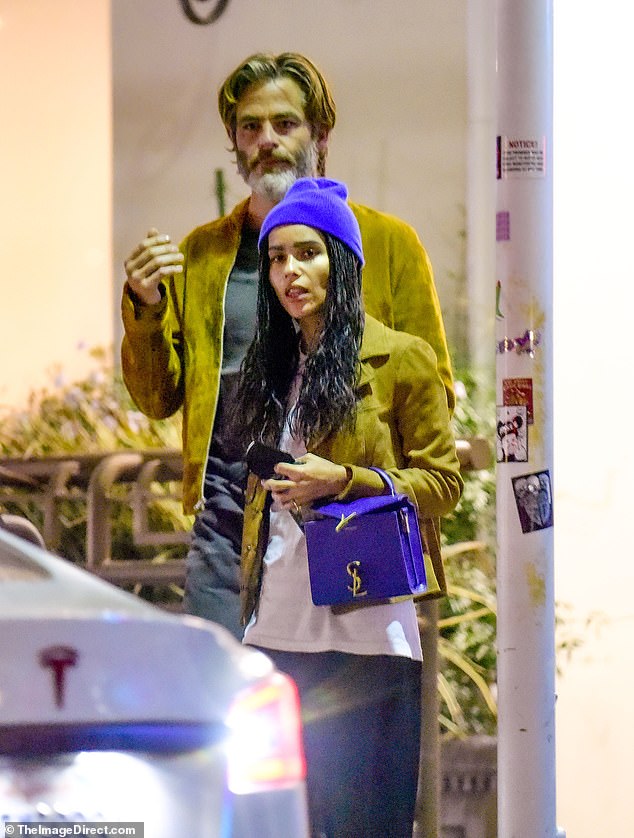 The superstars was spotted sharing an embrace after grabbing a bite to eat at Sushi Park in Los Angeles.

Zoe, 32, fought off a chill with a bright blue beanie while Chris, 41, exuded autumnal style in a brown suede jacket.

The Batman actress kept it casual with a loose white T-shirt and billowing black trousers, however injected a touch of glam with her purple YSL purse.

Chris opted for a black T-shirt, jeans, and suede footwear.

While Chris and Zoe have previously been romantically linked, the actor did attend Zoe’s wedding to Karl Glusman in 2019.

But that marriage was not meant to be, and their divorce was finalized earlier this year.

Nice seeing you! The superstars was spotted sharing an embrace after their meal

Looking and feeling cool! Zoe, 32, fought off a chill with a bright blue beanie while Chris, 41, exuded autumnal style in a brown suede jacket

She has since entered a new relationship with Channing Tatum, and last week Zoe was seen hanging out with the actor and his daughter Everly, eight.

Zoe and Channing confirmed their romance last month when they were spotted holding hands in public, several weeks after attending the Met Gala.

While at an afterparty, they ‘did not take their hands off of each other,’ a source told People at the time.

All ears: The friends enjoyed a relaxed chat outside

‘They are more relaxed lately,’ a source told People in October. ‘They don’t seem to care about hiding their relationship anymore. It’s obvious that they are very happy.’

As for Chris, he has been dating Annabelle since 2018. He even attended Zoe’s wedding with her.

‘Chris and Annabelle are dating! She was seeing someone else when they met,’ a source told Us Weekly in 2018.

‘They kept it casual for the beginning. Chris was very attentive and wooed her to get her attention away from the other guy.’