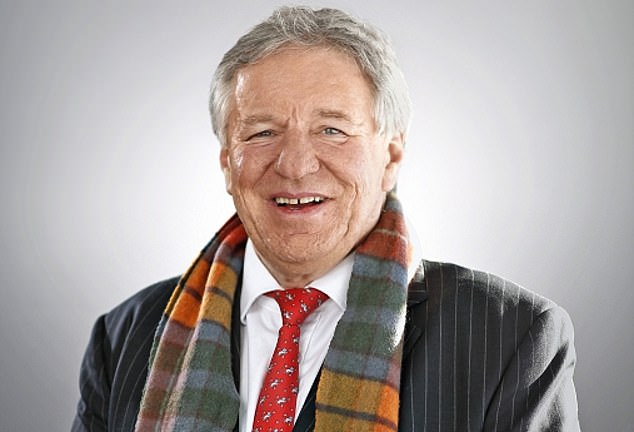 Comeback fund king in bid battle: He’s been down, but never out and now Martin Gilbert has launched his latest swoop


City titan Martin Gilbert has been thrust into a takeover battle as he tries to seize control of fund manager River and Mercantile.

The 66-year-old founder of Aberdeen Asset Management has launched a bid for R&M through his investment vehicle AssetCo.

However, he faces competition from fund manager Premier Miton, which has made a competing offer for R&M.

It is the latest twist in the eventful career of the man dubbed the City’s Comeback King.

A married father of three, Gilbert is a bon viveur known for wining and dining at global talk fest Davos and at shindigs he hosted at the Highland Games in Braemar.

But his sociable exterior co-exists with unstoppable ambition and a Houdini-like ability to escape from seemingly ruinous debacles.

A takeover of R&M would mark a full-scale return to the Square Mile just two years after he left his job as boss of finance giant Standard Life Aberdeen.

Gilbert by his own account jumped before he was pushed after losing out in a power-struggle with a rival executive.

He is chairman of fintech firm Revolut and the hedge fund Toscafund as well as serving as a senior non-executive director at commodities giant Glencore.

A golf fanatic who has played with former US president Donald Trump, he chairs Scottish Golf, the sport’s national governing body.

He is also deputy chairman of R&M but has recused himself from the board for talks relating to the potential bid. R&M shares rose 8.8 per cent, or 25p, to 310p – giving it a value of £265million.

Gilbert’s AssetCo – which specialises in buying and operating wealth management companies – already owns a 5.85 per cent stake in R&M, while Premier Miton holds 5 per cent. His swoop to take full control comes nearly four decades after he set up Aberdeen Asset Management in 1983.

He built the company into a FTSE 100 giant with more than £300billion of savings before merging it with Edinburgh-based savings giant Standard Life in 2017.

Asset managers, which actively manage funds, have been bulking up in recent years to cut costs and fight off competition from rivals running passive, or index-tracking, funds

Gilbert was joint chief executive of the combined business – now called abrdn – until he stepped down in 2019, saying he wished to spare the chairman the embarrassment of firing him.

That was not the first setback for Gilbert, who admits he was lucky to survive the ‘split capital’ investment trust scandal in the early 2000s which wiped out the savings of thousands of small investors.

He and his colleagues were branded ‘sophisticated snake oil salesmen’ by MPs and Aberdeen came to the brink of administration.

Gilbert has a personal stake of 8.55 per cent and has already secured three acquisitions – including Edinburgh-based investment house Saracen Fund Managers – and raised £25million from investors.

Asset managers, which actively look after funds, have been bulking up in recent years to cut costs and fight off competition from rivals running passive, or index-tracking, funds which have lower costs.

Any takeover of R&M is conditional on it completing the £230million sale of its pensions business to Schroders. That would leave it with assets of more than £5billion.

AssetCo said its business and that of R&M were ‘highly complementary’ and a tie-up would ‘create significant value for the combined group’s clients, portfolio managers, employees and shareholders’.

The other bidder, Premier Miton, said it has been ‘assessing the merits of a combination with R&M over a period of time’ and that a deal would benefit both companies’ shareholders.

Both suitors added that ‘there can be no certainty’ that a firm offer for R&M will be made.

According to UK takeover rules, Premier Miton and AssetCo now have to table firm offers for R&M by December 21 or walk way.

Premier Miton shares were down 3.7 per cent, or 7p, to 180p. Meanwhile, AssetCo shares were flat.