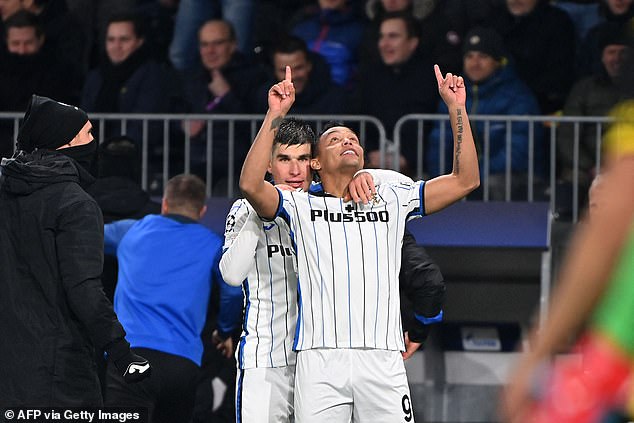 
Atalanta’s Luis Muriel came off the bench to equalise two minutes from time and snatch a 3-3 draw at Young Boys in a frenetic finish to their Champions League clash on Tuesday.

The Italians had been 2-1 up with 10 minutes remaining and looking to move into second place in Group F before the Swiss rallied with two goals in a four-minute spell to go ahead.

But Muriel’s 88th minute strike kept Atalanta in the race for a top two finish and a knockout stage berth – effectively needing to beat Villarreal in their last group game on December 8.

Young Boys fought back twice from behind to lead 3-2, but were pegged back by Muriel’s goal

Manchester United lead the group with 10 points, three ahead of Villarreal with Atalanta on six and Young Boys on four.

Atalanta had taken an early lead as Duvan Zapata kept up his goalscoring form, being allowed by the home defence to turn and shoot from close range in the 10th minute.

But Young Boys, who are now out of the Champions League reckoning, fought back to equalise with a 39th minute header from the imposing American international Jordan Pefok.

Atalanta’s defender Jose Luis Palomino then hammered home a left footed shot from the edge of the penalty area six minutes into the second half to restore their lead only for the Italian club to implode as the game entered the final 10 minutes.

First substitute Vincent Sierro and then fullback Silvan Hefti scored as Young Boys were suddenly catapulted back into contention.

But they were condemned back to last place in the group standings by Muriel’s late equaliser.