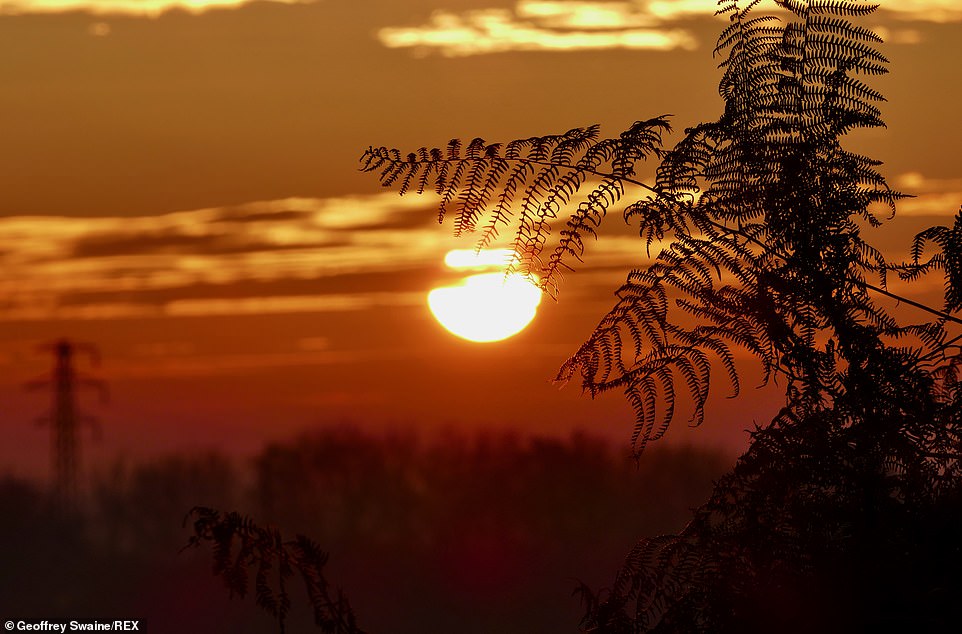 Blizzards could hit Scotland as snow flurries and gales up to 80mph are set to rock the UK this weekend in a dramatic turn from an otherwise mild November.

The Met Office issued yellow weather warnings for Friday and Saturday as they predicted travel chaos and power cuts for almost the entire country on Saturday.

Wintry showers and hill snow will hit the UK as far south as Wales and East Anglia later this week as temperatures plunge and gales reach up to 80mph in Scotland and northeastern areas – and 50-60mph elsewhere.

The Met Office has warned the extreme wind could cause chaos later in the week, including; delayed road, rail and ferry journeys as bridges and roads close; damage to buildings; power cuts; and issues with mobile phone coverage.

It added: ‘Gusts seem likely to reach 50 to 60 mph widely, with 70 to 80 mph possible in coastal locations, particularly in parts of Scotland and north-east England.’

Warnings on the weather forecaster’s website say ‘there is a slight chance of some damage to buildings, such as tiles blown from roofs’ and ‘there is a small chance that some roads and bridges could close’.

‘As the temperature drops off through Friday night there’s a chance we could see snow falling over higher ground in Wales, the Pennines and a dash across East Anglia.’

Winds could reach speeds of up to 46mph in Stornoway, Scotland, on Thursday before showers and ‘occasional longer spells of rain’ drench the UK at the end of the week. Pictured, the sun rises over Dunsden, Oxfordshire this morning

Showers will turn ‘wintry over high ground’, with the Met Office agreeing there will be ‘some hill snow at times’ later this week. Pictured, frost covered leaves in Dunsden, Oxfordshire

Temperatures around the country will mostly stay above freezing, with the average at 7C, although the mercury will fall below 0C overnight in Scotland. According to the BBC, a band of rain ‘will sink south-eastwards across northern areas’ before clearing up.

It said the showers will turn ‘wintry over high ground’, with the Met Office agreeing there will be ‘some hill snow at times’ later this week. Today most of the country will be ‘mostly dry and rather cloudy’ with ‘the odd light shower’ but more severe weather is due closer to the weekend.

The spokesman added: ‘Showers could fall as snow over higher ground in Scotland. It’ll be windy in north and western Scotland. That cold front sticks through day and brings cold to rest of UK with widespread frost behind the cold front.’

The strong winds are set to affect the majority of the UK, with only a small part of south-east England avoiding a yellow weather warning, and it will be in place until 6pm on Saturday.

He added: ‘The cold front is just lingering over the south at this point. There will be showers in northern Scotland and a chance of snow across high ground but it probably will not be settling.

‘It is mostly dry elsewhere. In the evening the rain moves into the northwest. There could be some snow on the edge of that in the cold air but it’ll quickly turn to rain as it moves to Scotland and warmer air comes across.’

He said there will be a change on Friday, and weather warnings were put out at 9.51am of ‘strong winds’. ‘A low pressure area brings strong winds and heavy rains to northern parts of the UK and spreads to a wider area of the UK through Saturday.’

‘Along with the wind we’ve got heavier rain in north England and south Scotland. Later on Friday that could start to fa;l as snow over the highlands, which is not unusual for the end of November.

‘Later in the evening wet and windy weather spreads south. There might be the odd snow flurry in the south but it’s unlikely to settle. It’s wet and increasingly windy across large parts of the UK. Peak gust speed is 80mph and it is windy after a mild November. There are still leaves on trees so it could cause disruption’.

Good Morning Britain’s forecast added that it would be ‘clear, cold and frosty’ with ‘Scotland and Northern Ireland clouding over’ and the ‘return of snow later this week’.

A Met office forecaster said Friday would be ‘cold and unsettled with showers and occasional longer spells of rain’ as well as ‘often windy, with potential for severe gales in the west on Friday and Saturday.’

A wind warning has been released for Northern Ireland and Scotland on Friday, before extending to almost the entire of the UK on Saturday

The BBC’s monthly forecast for November says ‘a surge of colder Icelandic air will spill across the UK over the final 10 days of November’ and this could linger into the beginning of December.

‘A secondary push of colder Icelandic air’ is expected late next week, which will further drop temperatures’ the forecast states, adding that ‘sharp frosts may occur during some evenings late in the week’.

As temperatures drop, ‘a few spells of rain showers and even some patchy snow showers’ may hit the UK, mainly in Scotland, with winds also experiencing an uptick as the week progresses.

Good Morning Britain’s forecast added that it would be ‘clear, cold and frosty’ with ‘Scotland and Northern Ireland clouding over’ and the ‘return of snow later this week’. Pictured, a red stag in Bushy Park, London

November has seen warmer than normal temperatures so far, particularly in parts of eastern Scotland, which are expected to continue until the end of the weekend.

The calm conditions have been cited as one of the reasons why so many migrants are successfully crossing the English Channel from northern France.

BBC forecasters said while some showers over high ground in Scotland could fall as snow, it is not believed any significant accumulations will arrive.

Forecasters added that conditions for snow to fall are ‘quite specific’ and the likelihood of it falling in Britain will become clearer closer to the time.