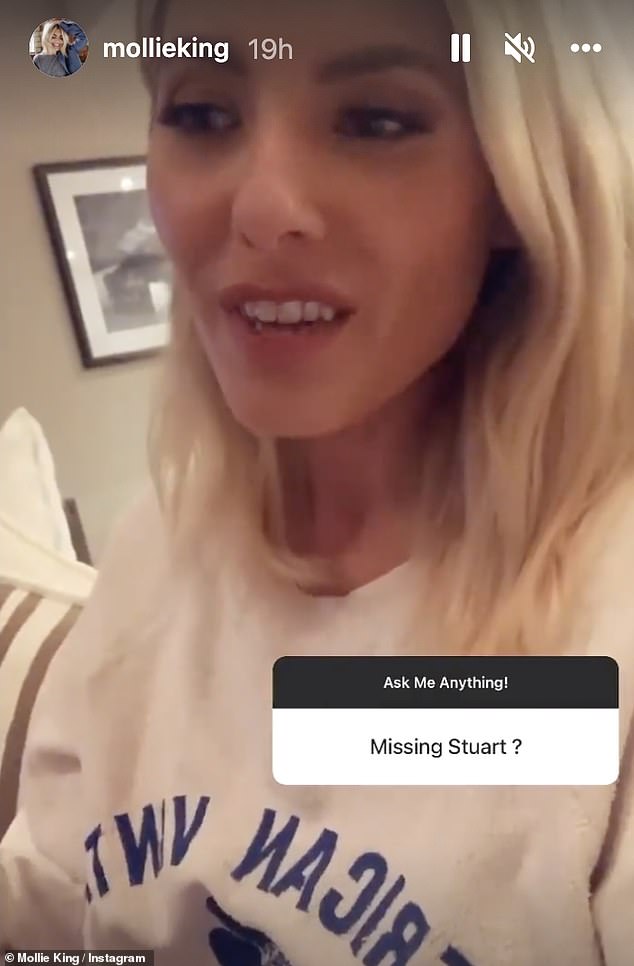 
She got back from a two-week holiday to Mauritius with her future husband just two weeks ago.

And on Tuesday night during an Instagram Q&A, Mollie King, 34, admitted that she’s already missing her fiancé Stuart Broad, 35, who is now away in Australia playing cricket for England in the Ashes until the end of January.

The Saturdays singer insisted she’s trying to ‘stay positive’ and praised the sports star for Facetiming regularly, but confessed she can’t stop thinking about how he won’t be around for Christmas and New Years.

Missing her man: On Tuesday night during an Instagram Q&A, Mollie King, 34, admitted that she’s already missing her fiancé Stuart Broad, 35, who is in Australia for three months

Asked if she’s missing Stuart, Mollie told her followers: ‘Yes, how did you guess? I’m really missing him. Especially because we had that holiday for two weeks together, where we were in each other’s company so much.

‘And then to go from that to him being away now until mid to end of Jan. I just keep thinking oh my gosh it’ll be Christmas and then New Year, and then I see him.

‘But I’m trying to stay really positive and keep really busy. My family and friends have been amazing, so I’m quite often with those guys.

‘But yeh, missing him a lot. He is good at Facetiming and calling though. He’s got a lot better at that.’

Betrothed: Stuart is in Australia playing cricket for England in the Ashes until the end of January and left to go down under two weeks after the couple holidayed in Mauritius (Pictured)

Elsewhere in the Q&A chat, Mollie confessed that she’s yet to pick out a gown for her upcoming nuptials to Stuart.

She said: ‘I haven’t yet chosen my wedding dress, no. But don’t think I’m not spending every waking minute on Pinterest and Instagram – there’s just so much inspiration out there right now.’

Mollie and cricketer Stuart have been together since 2012 and shared the news of their engagement in January this year.

Wedding chat: Elsewhere in the Q&A chat, Mollie confessed that she’s yet to pick out a gown for her upcoming nuptials to Stuart

Asked what she uses on her skin to get her glow, Mollie revealed: ‘I’ve been using the JS Health vitality X plus collagen powder. It’s really easy. It’s basically one scoop and I pop it in my water in the morning.

Mollie also explained how she finds that sollagen has also really helped to keep her hair strong and healthy especially when on holiday in the sun.

Soon-to-be-married: The pair have been engaged since January, having dated since 2012