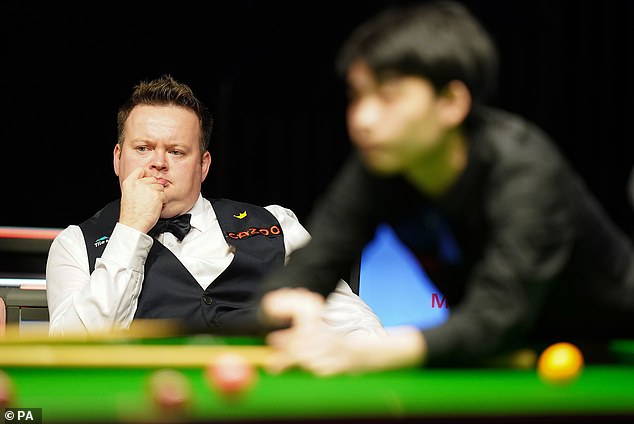 By Alex Bowmer For Mailonline


Shaun Murphy has slammed the UK Championship’s decision to allow amateur players to compete there – after being knocked out by one in the first round.

The 2005 winner of the event was pitted against Si Jiahui, who benefited from a player withdrawing to secure his place at the tournament at York Barbican.

The 19-year-old certainly took his chance, and despite seeing his 5-1 lead evaporate as Murphy took four straight frames, the Chinese teenager held his nerve to secure a memorable victory.

Murphy was less than impressed and angrily told BBC Radio 5 live: ‘I feel extremely hard done by that I have lost to someone who shouldn’t even be in the building.

‘We are self-employed individuals and not contracted sportsmen. We don’t play for a team.

‘The other runners and riders in the tournament, it is their livelihood too. It is wrong, in my opinion, to walk into somebody who is not playing with the same pressures and concerns I am.

In response to Murphy’s comments, the World Snooker Tour said: ‘We respect Shaun’s opinions, but in this case we strongly disagree with his comments.

‘Many elite amateur players like Si Jiahui train and compete full-time in the hope of earning a guaranteed tour place, therefore they are competing under significant pressure with no guarantees.

‘Providing opportunities for the best amateur players is important for our growth as a sport and that is something that Shaun benefited from during his early days as a player.’

The statement also said that Si ‘deserves his place in our events based on his results’ despite his amateur status.

Defending champion Neil Robertson, who faces amateur John Astley on Thursday, was one player to come out in support of Murphy’s point of view, saying: ‘I totally get where Shaun’s coming from.

‘When you’re playing one of the Chinese boys, some of them are amateurs, but some are as good as anybody in the top 50 in the world.

‘Amateurs are under a completely different pressure where there’s actually no pressure, because they’re not competing for ranking points.

‘They’re basically on a free hit at a pro, so I completely agree with what Shaun’s saying there, because it is very dangerous.’

Amateur players are needed in the current UK Championship draw as there are 128 spots up for grabs, but only 122 professionals on the World Snooker Tour during the current 2021-22 season.

Many fans took to social media to accuse Murphy of hypocrisy over his outburst as an article was dug up from 2019 showing the former World No 3 attempting to qualify for The Open golf.

In the article, Murphy said of his amateur status in the lead-up to the event: ‘Golf isn’t my livelihood.

‘Relative to the other players I will be playing against, it doesn’t really matter to me if I win or lose.

‘I won’t be under the pressure they are under. Most of them are trying to win. I am just trying to have a good day out. I could knock it round in anything from 68 to 108!’