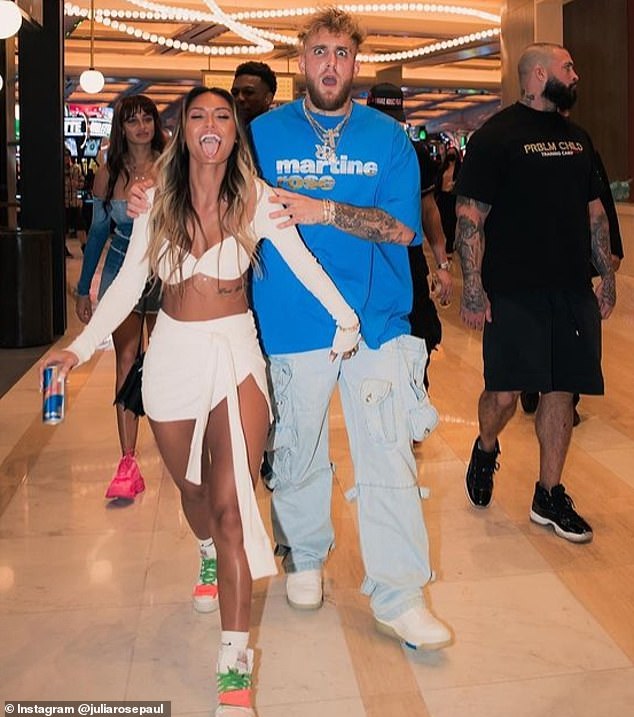 Tommy Fury is left embarrassed as his dad John unleashes a furious retort to criticism from Jake Paul, claiming his son will ‘get your girlfriend and f*** her like a DOG’ after knocking his rival out


Tommy Fury was left speechless when his dad John told Youtuber-turned-boxer Jake Paul that his son would take his girlfriend and ‘f*** her like a dog’ after their fight in December.

There is plenty of bad blood between both sides ahead of their fight in Florida on December 18 and tensions boiled over at a press conference on Wednesday afternoon.

Fury and Paul have exchanged jibes over social media and have goaded each other about what will happen in the event that they win the fight.

Jake Paul (right) has been warned Tommy Fury will ‘f**k’ his girlfriend Julia Rose after their fight if he wins by knockout, according to Fury’s father John in what a furious Wednesday rant

John Fury took the barbs to a new level with a vulgar riposte that his son will take Paul’s girlfriend Julia Rose and ‘f**k her like a dog’ once he secures a knockout win.

‘When Tommy beats you he is going to get your girlfriend and f*** her like a dog in front of you,’ John Fury Sr shouted.

Paul, who was dialed in on a video call, shot back: ‘That is so cringe you have never accomplished anything in your life.’

John Fury refused to cower despite his sons, Tommy and Tyson, left mouths agape at his first jibe.

Tommy Fury (left) is ready to take on Paul (right) on December 18 at a fight in Tampa, Florida

‘If you don’t like it change the television channel,’ a furious John Fury said.

‘You are the idiot for taking this fight and you are getting it you bum. Enjoy the moment p***k. Dream on d***head.

‘This is the first real fight you are involved in and you are going to feel the wrath of Tommy Fury, I watched you last fight you were actually rubbish.

‘I don’t know who has blown smoke up your ringer but you are rubbish with a capital R.’

Paul is new to the sport of boxing but has a 4-0 professional record, three of which ended by way of a knockout.

By contrast, Fury has had seven fights and is also unbeaten having gone 7-0, four of those wins coming by knockout.

At the end of October, Molly-Mae tweeted a picture of the Paul-Fury fight poster and captioned it: ‘Time to get the job done baby.’

By way of response Rose shot back: ‘Alright… let’s make a bet then.’

Nothing was ever agreed between the two partners but the jibe of John Fury is likely to have re-lit the touch paper of animosity between the couples.