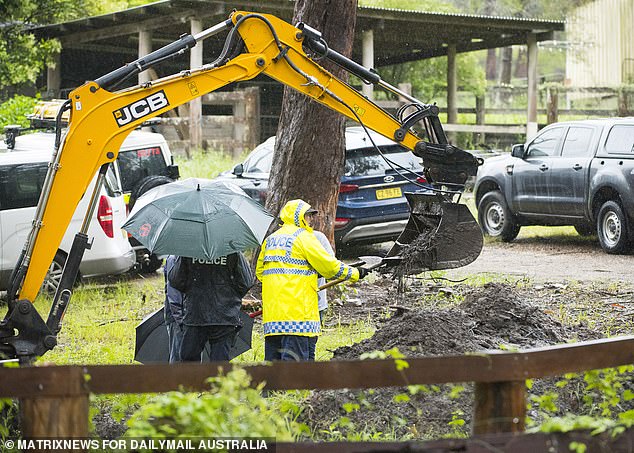 One of the sites police are digging up in the hunt for William Tyrrell’s body was once a riding school for the disabled where the little boy’s foster mother drove to on the morning he vanished.

Six days after William disappeared on September 12, 2014, his foster mother re-traced her steps with a detective at the bottom of the hill at the home in Kendall, on the NSW mid north coast, where the three-year-old was last seen.

She told police she drove down Batar Creek Road looking for William and stopped at the riding school to let a car behind her pass, taking a moment to make sure he wasn’t nearby.

Police are now investigating whether she ‘threw an item out of the window’ at that time, as haunting audio emerges of little William’s ‘infectious giggle’ just weeks before he disappeared without a trace.

The foster mother said she turned back after reaching the riding school and deciding ‘William wouldn’t have travelled this far’, returning to Benaroon Drive minutes later to keep up the hunt for the boy.

Daily Mail Australia can reveal at least one of the three police dig sites is on the property where the riding school was located at the time of William’s disappearance.

In one video, William rides his new bike while he can be heard laughing and his foster parents said he was ‘really good’ on the bicycle

The organisation, which provides opportunities for disabled people to ride horses, relocated in 2016, two years after William vanished from the front of his foster grandmother’s home on September 12, 2014.

Fresh information sparked a renewed police search, and they’ve spent the last 10 days digging and sifting through the soil at three locations along Batar Creek Road.

On Monday, an excavator dug up a patch of grass at the base of the former riding school while detectives hand sifted through the dirt and junk that was uncovered. The isolated search took up the best part of a day.

Across the way is where the primary dig is underway. Officers are quietly confident that if they persist in this area, they’ll find William’s remains.

Police have now raked through the topsoil, sifted through the dirt with their bare hands and on Wednesday began to drain the same creek they emptied last week which was filled with rainwater again in the days after.

William’s foster mum, who police have identified as a person of interest, told police she drove to the school looking for the boy on the day of his disappearance

In total, they’ve found 13 ‘unusual’ items that have been sent for forensic testing. It’s not clear if any are relevant to the search for William.

When William’s foster mother gave detectives a ‘walk through’ of the morning he vanished, she re-enacted the stressful moment she realised he was truly lost.

Running her fingers through her hair, she said: ‘I’ve got my head out of the window looking for William. I drive really slow on [redacted], get to the riding school and think, “he’s not here”.’

‘I bring the car back up and I get out and I look for him again.’

Footage of the walk-through was released as part of the 2019 coronial inquest and showed the now 56-year-old foster mother showing police around the expansive property.

While she admittedly doubted he’d have made his way anywhere near the riding school, the woman said she was ‘clutching at anywhere’ to find him.

No one could stop us searching for our boy

‘[Thinking] would he get through that? Would he climb through that?,’ she said. The family searched drains and the bushes surrounding the property, calling on neighbours to keep an eye out as well.

Police are now reportedly investigating if the foster mother ‘threw an item out of the car window’ when driving down the street searching for William.

A car formerly belonging to the foster grandmother was seized last week. It’s understood police believe the foster mother was driving the car on the day William disappeared.

The car has never before been examined but has since been sold to new owners in Gymea in Sydney’s south.

William Tyrrell’s foster mother during a ‘walk through’ of the morning he vanished with NSW Police detectives, including telling them how she drove to the nearby riding school

Officers remain quietly confident that if they persist in the search in the current dig areas, they’ll find William’s remains

During the inquest, the foster mother described in vivid detail how ‘silent’ it fell in the backyard when William, who was pretending to be a tiger, stopped ‘roaring’.

She stopped drinking her cup of tea, went to find him, couldn’t and began to panic.

‘All I could think was why can’t I hear him? Why can’t I see the red (of his Spider-Man suit)?’

It comes as haunting audio emerges of the toddler laughing in clips recorded as early as his second birthday, in June 2013, just over a year before he disappeared.

William Tyrrell (pictured) vanished from his foster grandmother’s house in Kendall, on the NSW mid north coast in 2014 sparking an enduring police investigation

They form part of the Network 10 podcast ‘Where’s William Tyrrell’, which was seized last week by the NSW Police strike force investigating the toddler’s disappearance.

In one video recorded just weeks before William vanished, the toddler can be heard speaking with his foster father in Bali on the same holiday the boy was bought the Spider-Man suit he was wearing when he vanished.

Police seized the podcast’s audio files and documents as they launched a high intensity search of the three sites at Kendall.

Excerpts of the home videos released by police after the disappearance do not include the full audio of the little boy laughing.

In the first video, recorded on June 26, 2013, on William’s second birthday, William can be heard laughing and saying a few, almost distinguishable words.

Sitting in a high chair with chocolate smeared over his face, he is being recorded by with his foster father, who said the young boy’s personality began to come out early on.

The foster father told Ten’s podcast that caring for William had changed the foster parents’ lives ‘forever but in a really positive way’.

William’s foster mother said ‘his giggle was infectious. People would hear that and you couldn’t help but smile… with a strong and happy response’.

In another video, a young William is giggling uncontrollably as his foster father records him running towards him while wearing a blue black backpack.

The ‘Where’s William Tyrrell’ podcast says William did not immediately bond with his foster mother when he came to live with them in 2012 when he was seven months old.

But the foster mother describes how the young boy took to his foster father and the pair soon became ‘inseparable’ .

‘That connection was just so special,’ she said.

‘It’s hard to put into words. You could feel the relationship and the joy that was on his face whenever he was in his dad’s arms.

‘They were just two peas in a pod, they melded together. Watching the two of them together was just incredibly precious.’

In late July to early August, 2014, the foster parents took William on a holiday to Bali.

It was there that William – who at the time was ‘obsessed’ with Spider-Man  – was given a red and blue suit they bought in Bali.

The foster father filmed William, again with chocolate smeared on his face, sitting at a table in Bali.

The two discussed being on holiday and William can be heard saying a few words.

Foster father: ‘how are you enjoying your holiday so far William?’

William woke at 6.30am on Friday September 12, 2014 and giggled with his foster father before dressing in the Spider Man suit bought for him in Bali just weeks earlier