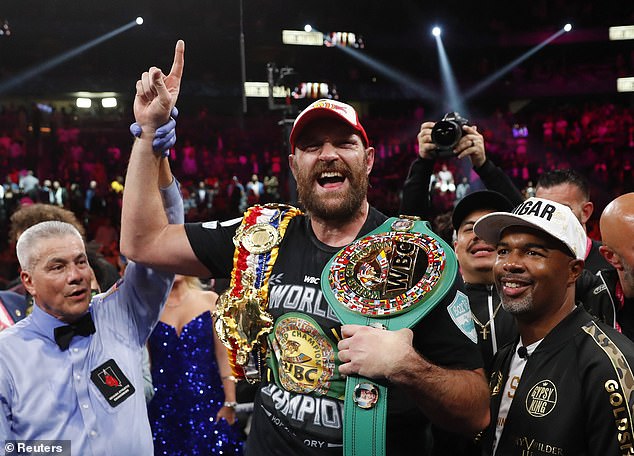 Tyson Fury ‘would like’ Dillian Whyte to be his next fight’, says his promoter Bob Arum as the American reveals three-fight plan next year for the ‘Gypsy King’


Tyson Fury plans to fight three times next year and he would like to start with a mandatory defence against Dillian Whyte, according to his promoter Bob Arum.

The ‘Gypsy King’ is awaiting news on his next opponent after stopping Deontay Wilder in their trilogy showdown in October.

Sportsmail revealed Fury’s camp are in talks with Whyte as he continues his legal fight with the WBC.

Arum said Fury was interested in facing Whyte when asked about him returning in February or March next year.

‘And he wants to do at least three fights in 2022, hopefully that is how it will roll out and Fury is ready to fight anybody. I really believe that Fury is the pre-eminent heavyweight in the world and there is nobody out there that he would be reluctant to fight.

‘I think Dillian Whyte should be the next fight for Tyson Fury but there is talk about Usyk who beat Joshua, but Joshua is not going to step aside until he is guaranteed the winner of Fury vs Oleksandr Usyk.

‘And how can anybody assure him of that with Whyte in the mandatory position? The way I think it will fall out is Fury against Whyte which I believe Top Rank will co-promote with Frank Warren and can be held in the UK.’

Fury’s UK-based promoter Frank Warren said they were only willing to offer his rival 20% of the prize pot.

He said: ‘We are talking to Dillian’s people but he starts at ten per cent. At best he can expect an 80-20 per cent split in Tyson’s favour because he only got £300,000 for his last fight and the WBC make judgments according to sales power.

Fury added: ‘Three hundred grand? That bum’s not worth three hundred quid. We’ll see if how much he wants a title fight.’

‘We can’t wait forever,’ Warren added. ‘Tyson needs to fight in February or early March. Joe Joyce is one of several alternates.’