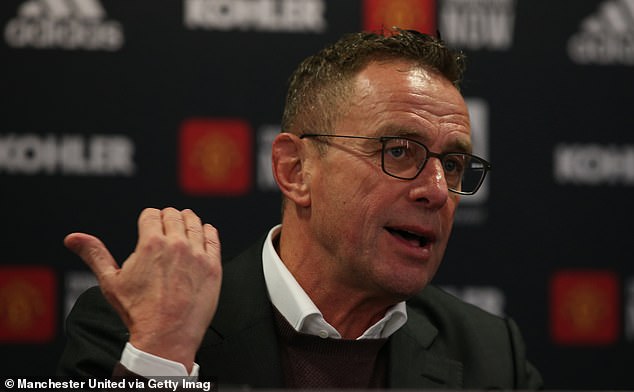 Ralf Rangnick has laid out his plans to turn around Manchester United and insists he wants the team to be challenging for the Premier League title again by 2024.

The German took over as interim manager in the wake of the 3-2 victory over Arsenal on Thursday night, and he faced the media for the first time this morning.

In a wide-ranging half an hour press conference, the 63-year-old spoke openly about his desire to bring continuity to Old Trafford, as well as detailing how he would adapt to help Cristiano Ronaldo.

He also refused to rule out becoming the club’s permanent manager if his time in charge goes well over the next six months, and revealed that previous boss Ole Gunnar Solskjaer spent two hours giving him the inside track on his new club at the weekend.

After arriving at Old Trafford on Friday morning, Rangnick first thanked journalists for coming so early, before answering questions on his new club – and hitting out at their transfer policy and failure to stick to their DNA.

‘The club has had no continuity in signing new players and sticking to the DNA of the club,’ he said. ‘In the future, the board members and my self have the same opinion. It’s important not to have many changes in management.’

When asked about his ambitions for his time at the club – currently six months as manager, followed by two years an an advisor, he added: ‘In the ideal world, we will be in the top four regularly but also playing for titles.

United fans are excited to get started with Rangnick, who will be in the dugout on Sunday

‘We are still in the Champions League and can hopefully get further in that competition. The DNA of the club is clear.

‘I have, of course, watched all the most recent games, even before contact from the club. I’m pretty well aware of what’s happening here, and in the Premier League. It’s clear the team have abundantly talented players.

‘The major target for me is to bring more balance into the team. Even yesterday we conceded two goals and needed three to win the game. We’re conceding too much. It’s my approach to help the team, to get more balance.

‘[The squad] is definitely good enough to compete in the top [four]. The top three are very stable, and have great coaches. This is something we have to develop. When Jurgen came to Liverpool, the squad he inherited was not a better one than what I have now at Manchester United.’

Rangnick was asked whether he could stay longer than six months in the dugout, and he responded by noting: ‘They have been very clear about a six-and-a-half month role… I may recommend they continue working with me for one more year.’

Ronaldo was also, of course, high on the agenda, and Rangnick admitted that he would adapt his playing style to suit the 36-year-old, as well as the rest of his talented squad.

‘You always have to adapt your style to fit the players,’ he said. ‘He is an amazing, top professional. At his age, I have not seen a player who is still that physically fit.

‘It’s about how we can develop the whole team, not just Cristiano. We play in the most competitive league in the world. All his team-mates will have to do the same.’

The 63-year-old is taking over from Ole Gunnar Solskjaer, the last permanent manager in the Old Trafford dugout.

The new boss tried to get Michael Carrick to stay, but he had already made up his mind

Rangnick, pictured at his press conference, wants United to be challenging for titles again

On many occasions, a new boss will not be able to speak to their predecessor, but Rangnick revealed that the Norwegian gave him two hours of his time at the weekend, to offer him the lowdown on his new side.

When asked which personnel at the club he had spoken to, the German said: ‘I had a long conversation with Joel Glazer, and I also spoke with Ole for almost two hours before the Chelsea game, telling me all the details.’

There was, too, a conversation with outgoing temporary boss Carrick, who he tried – and failed – to convince to stay at the club.

‘I had a conversation with Michael for more than an hour and tried to convince him, but he needed a break and I understand his decision.

Scroll down to read how Rangnick’s first press conference unfolded…