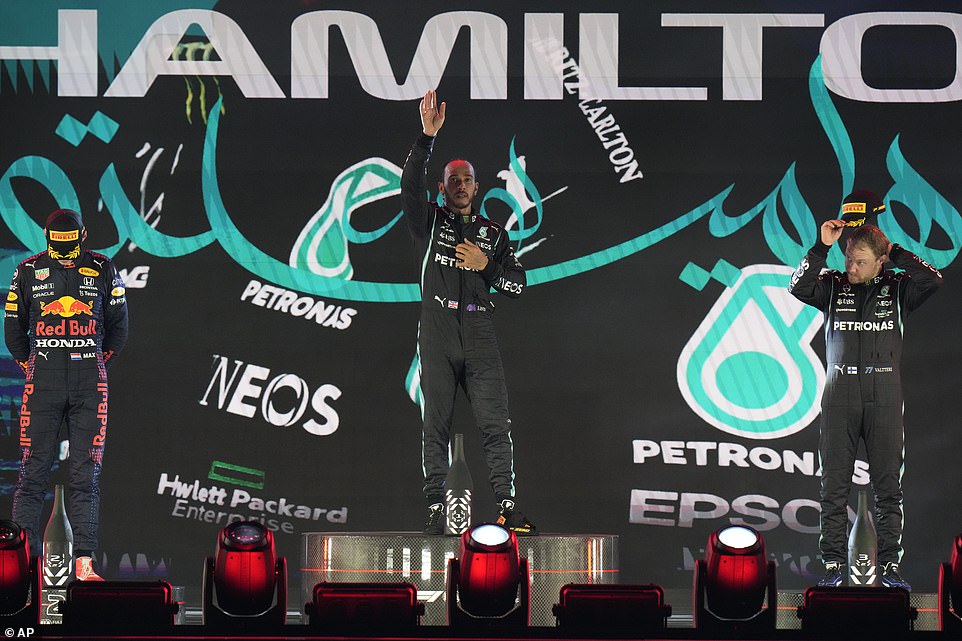 Lewis Hamilton took an incredible victory in an action-packed inaugural Saudi Arabian Grand Prix to draw level with Max Verstappen in the world championship standings heading into next weekend’s final race of the year.

The Mercedes man is aiming for a record eighth drivers’ title and headed to the Jeddah Corniche Circuit eight points adrift of leader Verstappen but with the momentum of winning the previous two races.

Having stormed to pole position on Saturday, Hamilton came out on top in a wild race which was twice halted by red flags and saw him tangle with the Red Bull of Verstappen – who he labelled ‘f****** crazy’ – as the pair wrestled on the track and bickered over the radio.

The upshot of this win, as well as the fastest lap, means Hamilton and Verstappen are locked on 369.5 points.

The remarkable coming-together on lap 37 will now be investigated and could rumble on into the days leading into next weekend’s title decider in Abu Dhabi.

Verstappen would come home in second place, claiming afterwards that: ‘This sport is more about penalties than racing.’

Unlike the earlier Formula Two race, the start here was surprisingly calm as Hamilton scampered away into the lead with Valtteri Bottas his rear-gunner after retaining second place.

The start of an enthralling race would begin as Mick Schumacher stuck his Haas into the barriers at turn 22.

Another red flag followed a standing start, which saw Esteban Ocon (right) move into first place ahead of the title chasers

A safety car was deployed as Hamilton and Bottas dived into the pits, the latter angering Verstappen as he slowed on track to avoid waiting behind his team-mate at the garage.

It would soon be Hamilton turning the airwaves blue as he fumed at the decision to red flag the race, essentially handing Verstappen a free pit stop.

‘Have they said what the reason was? The tyre wall that looks fine…that was a huge gamble we took,’ Hamilton said amid a flurry of beeps for foul language.

An 18-minute delay for the barrier to be fixed then led to a standing start with a second red flag thrown following a collision in the midfield.

Red Bull’s Sergio Perez (above) was one of four drivers to drop out the race after the first restart, including George Russell

There was still time for drama at the front of the field, Hamilton passing Verstappen who then cut turn one to keep the lead as Esteban Ocon also stormed past Hamilton to move into second.

During the break in racing as the latest accident was cleared away, the FIA and Red Bull were then left bartering over a penalty for Verstappen. It was agreed he would drop behind Hamilton for the second restart, with Ocon on pole for Alpine.

A fine dart down the inside at the second restart saw Verstappen take the lead but Hamilton soon made light work of Ocon and was on the tail of his title rival.

As Hamilton closed in a number of virtual safety cars for debris on the track halted his quest to take the lead.

But when the track was clear he was again squeezed out by Verstappen, who was told to give the place back by his Red Bull garage.

In doing so, Verstappen slowed down significantly and, as Hamilton turned to overtake, he ran into the back of the Red Bull: ‘This guy is f*****g crazy, man,’ came his radio call.

Despite wing damage, Hamilton would pass just as Verstappen was hit with a five-second time penalty for gaining an advantage in their earlier spat.

There could be more bad news for Verstappen, with the incident that saw the two title protagonists collide to be investigated by the stewards after the race.

From then on, Hamilton powered to the chequered flag and took the victory with the fastest lap, ensuring the pair head to the season-ending Abu Dhabi Grand Prix next weekend with nothing to separate them.