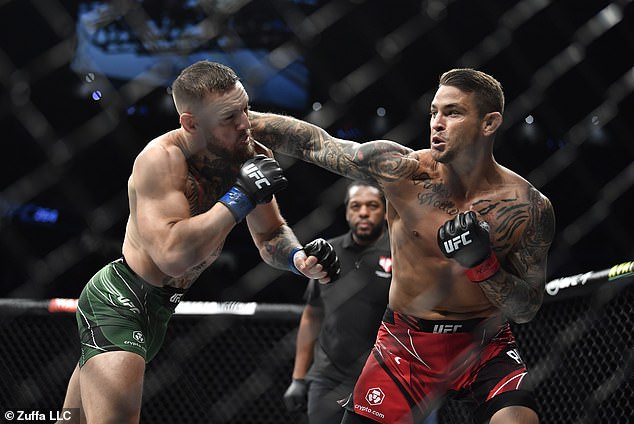 ‘He does look a little puffy’: Dustin Poirier takes aim at UFC rival Conor McGregor after he shocked fans with Instagram picture of his dramatic two-and-a-half stone weight gain


Dustin Poirier has ridiculed Conor McGregor’s current physique after the former two-weight UFC champion stunned fans by posting a picture on Instagram where he looked significantly bulkier than he usually does inside the Octagon.

The two fighters have a long-running rivalry having faced each other three times under the UFC banner.

McGregor knocked Poirier out in the opening round in their first meeting in 2014, but the American exacted revenge by scoring a stoppage victory inside two rounds at the start of this year.

The pair looked to settle the score in July, but the contest was brought to a premature end in the final seconds of the first round when McGregor suffered a broken leg, handing Poirier the win.

With the bout ending in unsatisfactory fashion for both men, there appears to be no love lost between Poirier and McGregor at the moment, and the former has done little to ease the tension with his latest comments.

Speaking about McGregor’s weight gain, with the 33-year-old currently walking around at 190lbs, Poirier told Michael Bisping: ‘I did see a picture. He does look a little puffy, man. He might want to slow down on the Black Forge, whatever he’s got going on.’

Poirier is set to take on Charles Oliveira for the UFC lightweight belt in the early hours of Sunday morning (UK time) as he looks to cap off a memorable year.

He previously challenged for the title in 2019, but lost by submission to Khabib Nurmagomedov in Abu Dhabi.

Meanwhile, McGregor is still recovering from his horrific injury, and is not expected to make his return until next summer.

The outspoken southpaw has been defeated in three of his last four fights, and has only picked up one win in the last five years in the UFC.