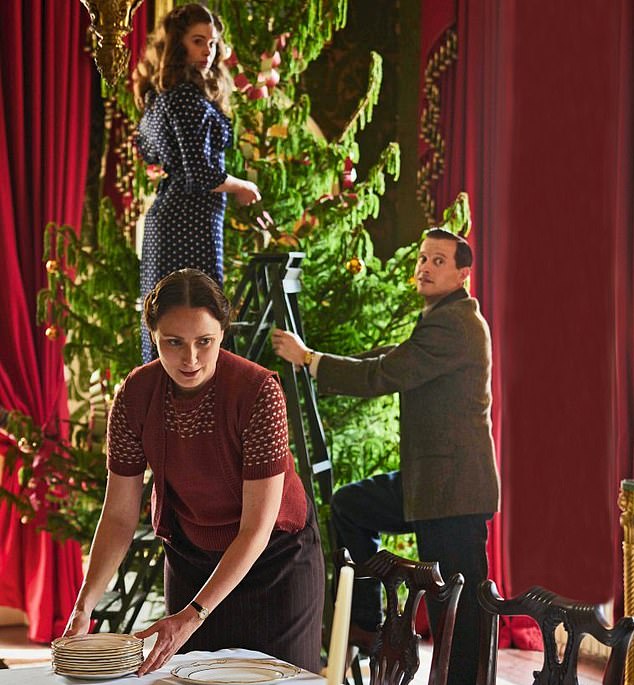 Romance, squabbles, home truths and trouble for Tricki Woo – the All Creatures festive special promises… All dramas Great and small

By Tim Oglethorpe For Weekend Magazine


An oversized elf costume, a gaggle of jumpy geese – there were some tricky challenges for Rachel Shenton, who plays farmer’s daughter Helen Alderson, while filming this year’s All Creatures Great And Small Christmas Special.

‘Helen becomes Santa’s assistant elf at the Skeldale House Christmas party this year,’ she reveals. ‘However, Callum Woodhouse – Tristan Farnon in the series – who played the elf last year is 6ft 1in and I’m only 5ft 1in, so the outfit didn’t fit. There wasn’t another one in my size so I could only wear the elf hat.’

Then there was a scene with her co-star Nicholas Ralph, who plays James Herriot, and a bunch of skittish geese. ‘There’s a point where Nick and I have to round up some geese on Alderson’s farm,’ says Rachel.

Helen and James round up geese, while Mrs Pumphrey’s Pekingese Tricki Woo battles a nasty bout of suspected gastroenteritis in this year’s festive special of All Creatures Great And Small. Pictured: Mrs Hall sets the table as Helen and James decorate the tree

‘Making tiny movements was key to keeping them under control, but Nick got too excited and spooked them and they kept running off in all directions, so we had to do quite a few takes of that.’

Viewers will obviously only see the one where Helen and James successfully marshal the geese into a barn, and it’s a rare moment of harmony between the vet and his fiancée in the festive special of a series that’s been a huge success for Channel 5 since they revived the 1930s drama last year.

‘The couple can’t agree on where to have Christmas lunch – at the farm with Helen’s family or at Skeldale with Mrs Hall and the other vets – and that opens up a larger debate about where they’re going to live once they’re married, on the farm or at Skeldale,’ explains Nicholas. ‘They can’t agree on that either.’

There’s certainly no sign of wedding bells alongside the sleigh bells in the festive special – despite the pleas of the show’s fans. ‘A lot of them are keen to see Helen and James get married but it’s only a year since Helen didn’t go through with her wedding to landowner Hugh Hulton,’ says Rachel.

‘I’ve read the books the series is based on, and in those James and Helen do get married so it’s a fair assumption they will in our series. But the Second World War is on the horizon and that might throw things a little off course…’

The course of true love is bumpy for some of the other characters too. Mrs Hall invites her gentleman friend Gerald Hammond to the party and then promptly removes all the mistletoe in case he gets the wrong idea, while trainee vet Tristan Farnon is told some home truths about how women view him by Drovers’ Arms barmaid Maggie.

Only Tristan’s brother Siegfried seems at ease with his love life, as glamorous divorcée Diana Brompton makes him an offer he really doesn’t want to refuse.

The most moving storyline involves Mrs Pumphrey’s Pekingese Tricki Woo, who’s battling to survive a nasty bout of suspected gastroenteritis. And Derek, the dog who plays Tricki Woo, rose to the task. ‘We were all in awe of him,’ says Nicholas.

‘He seems to respond to whatever the scene demands of him. When I anaesthetised him he gently went off to sleep right on cue, and when the director shouted cut he was back up again!’