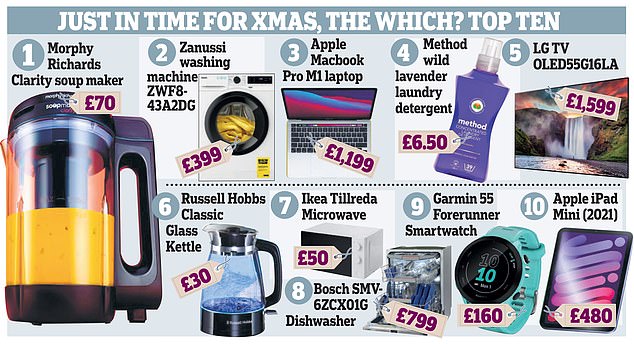 By Sean Poulter Consumer Affairs Editor For The Daily Mail


A soup maker hailed as being ‘near perfect’ has been crowned best tech performer of 2021.

Experts at Which? whittled down the 4,500 gadgets they have assessed during the year to a top 50 of the most impressive.

And while the likes of Apple and Elon Musk’s Tesla grab all the headlines, the surprise overall winner was the £70 Morphy Richards Clarity soup maker.

Judges at the consumer group said it was so far ahead of all the other similar products they tested that the competition ‘may as well not exist’.

They added: ‘Silky, lump-free soup is ready in just 21 minutes. And if you prefer something to chew on then a thicker one only takes seven minutes longer.

‘It’s a device that does its fundamental job so extraordinarily well that it’s near perfect – something that every product should aspire to.’

Second place went to the Zanussi ZWF843A2DG washing machine, priced at a relatively modest £399 and described by the Which? judging panel as ‘accomplished, impressive and affordable’.

They added: ‘It scores ten percentage points more than the average washer, but costs almost £200 less. It’s hard to argue with figures like that.

‘Clothes come out spotless and the whirlwind spin means they’re fairly dry, too. It’s not bare-bones, either, with 14 programs and sensors that adjust the wash based on the load size.’

Which? said: ‘Complex, demanding tasks are handled effortlessly… even with all that power and a vibrant screen, the battery can last more than 16 hours. It feels like magic.’

The consumer experts said: ‘It will shower you with picture quality that leaves you slack- jawed and sound that cradles you in sumptuous, well-balanced acoustic heaven.’

Also making the top ten this year are kitchen essentials such as the Russell Hobbs Classic Glass Kettle (£30) and the minimalist Ikea Tillreda Microwave at £50.

The surprise overall winner of the Which? top 50 gadgets was the Morphy Richards Clarity soup maker with second place going to  the Zanussi ZWF843A2DG washing machine

Apple’s highest-performing product was its £1,199 Macbook Pro M1 laptop which came in at third

Harry Rose, the editor of Which? magazine, said: ‘How does a soup maker beat the latest smart gadgets and electric vehicles to be crowned Which? product of the year? Simply by doing its job extraordinarily well.

‘Our testing covers thousands of items and whittling them down to 50 is a huge task.

‘But this year’s list shows Which? can offer you a recommendation for almost anything, whether you’re looking for a product to be good value, environmentally friendly or the latest in high-tech innovation.’