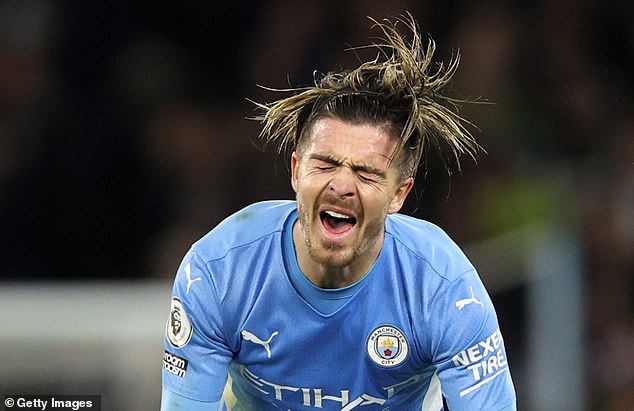 
Jack Grealish has opened up on his struggles for goals and assists since his British transfer record to Manchester City in the summer.

The 26-year-old England star left his boyhood club Aston Villa to join the reigning Premier League champions for a £100million fee to boost his chances of winning trophies.

But Grealish has admitted he expected more from himself at this stage of the campaign, after bagging six goals and 12 assists last season.

He told ex-Villa striker Dion Dublin on BBC’s Football Focus show: ‘I just felt like when I came here from Villa I looked at my goals and assists from last season.

‘So I obviously thought going to City, the best club in England, the best players, I’m going to go there and get 20 or 30 goal involvements but it ain’t been the case at all – I’ve actually struggled with my goals and assists.

‘Especially the price tag on my head, as soon as you don’t get them goals and assists for a while people start talking and doubting you then.

‘That’s where you need to trust in my own ability and take it from there.’

So far this campaign, Grealish has scored two and provided two assists in 13 league appearances.

Grealish opened his scoring account in the second game of the season against Norwich but failed to score in his next ten league games for the club.

He finally added to his tally during City’s thumping 7-0 win over Leeds.

Grealish said: ‘I was actually doing it the day before in training some crossing and finishing – mostly headers.

‘And I actually surprised myself with a few – I scored a few. I missed one against Watford a few weeks back.

‘To get on the scoresheet (against Leeds) and do it with a header, which I don’t get a lot of, is perfect.’

Grealish this week has also praised manager Pep Guardiola and stated how crucial he is to the team.

As previously reported, he said: ‘The amount of games he has won for us this season from his tactics is just unbelievable.

‘The craziest thing that he does is that every game is a different game plan. I know you have a lot of managers out there that like to stick with the same game plan no matter what team they are playing, but he is the complete opposite.

Grealish will be hoping to add to his tally when table-topping City travel to Newcastle on Sunday.