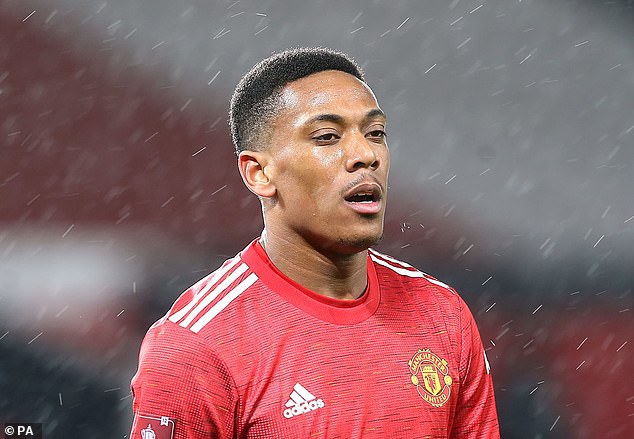 Manchester United ‘may be STUCK with wantaway striker Anthony Martial as rumoured interest from Barcelona, Juventus and Atletico Madrid is yet to turn into concrete offers for Frenchman’

By Faaez Samadi For Mailonline


Anthony Martial may face being stuck at Manchester United longer than he wishes as the club is reportedly yet to receive a firm offer for the Frenchman since his agent’s declaration that he wants to leave.

Martial has fallen significantly down the pecking order at Old Trafford, having made just 10 appearances all season and scored only one goal.

‘He just needs to play. He doesn’t want to stay in January and I will speak to the club soon.’

However, despite Martial’s agent issuing a come-and-get-me call with his comments, it appears the 26-year-old may not be as in demand as expected.

Barcelona have been linked with Martial, given the recent enforced retirement of Sergio Aguero.

Despite links with various European clubs, none have made firm offers for Martial’s services

However Xavi’s side is also reportedly keeping tabs on Martial’s United team-mate Edinson Cavani, and Manchester City’s Ferran Torres, with no suggestion that a formal offer is imminent.

Italian giants Juventus are also considering taking Martial on loan for the rest of the season, according to Calciomercato.

The Old Lady have struggled to score goals this campaign and are on the look-out for a suitable replacement for Cristiano Ronaldo, who returned to Old Trafford in the summer and pushed Martial further down the hierarchy.

In addition, earlier this week Eurosport reported that Atletico Madrid were examining a player-swap deal for Martial. However journalist Jonathan Shrager has since claimed that Atletico are not currently looking to bring Martial to the Wanda Metropolitano.

The various clubs’ reluctance to take a chance on Martial could be linked to his wayward career at United, in which he has shown glimpses of class but never performed consistently enough to establish himself the first team.

Add to that his significant wages and the prospect of the Frenchman making a swift January exit from Old Trafford could be slim.