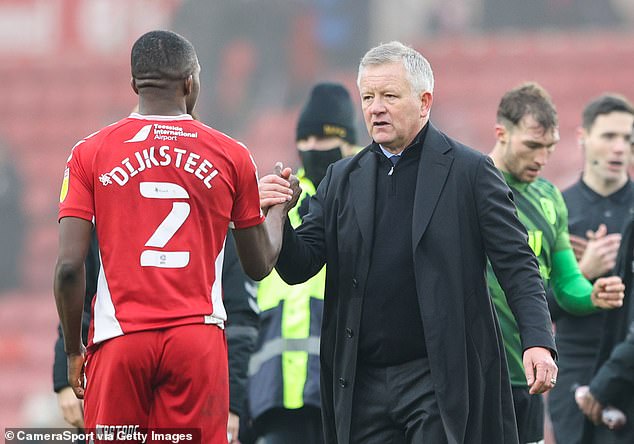 By Jason Mellor For Mailonline


Bournemouth’s mid-season wobble threatens to develop into something more damaging after they missed a chance to go top of the Championship with their latest Teesside no-show.

It’s six games without a win for Scott Parker’s stuttering side after a second-half penalty from Andraz Sporar proved decisive in continuing Middlesbrough’s upward mobility under Chris Wilder.

Bournemouth carved out enough chances to win, but let themselves down badly in front of goal as they failed to reward their hardy band of traveling fans – some who had set off at 1.15am on the 630-mile round trip from the south coast for the lunchtime kick-off.

Not that those dedicated 300 headed north with any confidence of seeing their side return with three points, given that the Cherries remain winless in this part of the world on all 11 visits stretching back 54 years.

The hosts took advantage of Bournemouth’s wastefulness to boost their play-off push with a hard-fought victory sealed eight minutes into the second half when Sporar found the bottom corner from 12 yards after Jaidon Anthony brought down the lively Isaiah Jones.

The Cherries have taken just six points from a possible 24, and the warning signs were clear early on as it took them half an hour to fashion an opening of note, although in mitigation they made up for lost time by creating enough clear cut chances which should have seen them go in three goals up at the break.

The first came courtesy of the hosts, whose penchant for playing out from the back far from instilled confidence.

Predictably enough, Jonny Howson directed Paddy McNair’s hospital pass to Anthony, who cut into the area but wastefully sent his angled drive the wrong side of the post.

As the visitors gained more of a foothold in the contest, Ryan Christie stood up a cross from the right to the far post where Dominic Solanke made the most of the mis-match in height with his marker Jones, only to head wide from five yards.

It was a miss topped before the interval by Christie, who lost his marker Neil Taylor at the far post but was unable to apply what should have been a routine finish in front of an unguarded net as the Scot’s mis-hit shot bounced into the turf and over the bar.

Boro’s best two chances bookended a first period high on energy but low on quality. Inside six minutes, Mark Travers stood firm in the Bournemouth goal to beat out Matt Crooks’ close range effort from a low Jones centre across the six-yard area.

The Cherries keeper was called into action again soon after the break, saving well with his legs from Sporar, but he had little chance when soon afterwards the Slovenian buried his spot kick low to his right for a fourth goal of the season.

At the other end, Joe Lumley beat out a Junior Stanislas free-kick – Bournemouth’s first effort on target more than an hour into the contest.

Travers remained the busier of the two keepers, diverting a first-time effort from Sporar over as the hosts held on comfortably enough to leave Bournemouth two points behind leaders Fulham, who can extend their advantage at the summit at home to Sheffield United on Monday.