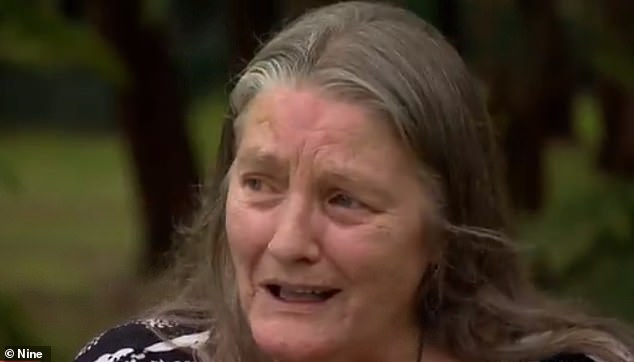 
A scammer robbed a disability pensioner of her life savings while she was still on the phone to them – leaving her penniless.

Kim Ford, 61, from the NSW Central Coast, eventually got back the $6,000 after her bank refunded her.

She was doing her rounds of online Black Friday shopping when she got a text from a number claiming to be from the online retail giant Amazon.

The number said it was going to charge her for a membership she had purchased the day before.

A shameless scammer robbed Kim Ford, a 61-year-old disability pensioner, of her life savings when she needed the money the most

However Ms Ford hadn’t made the purchase and thought there had been a mix-up so called the phone number supplied in the message.

The scammers asked her for basic details – age, address, name – to build trust before asking for her card details for the ‘refund’.

Ms Kim said she was still holding the phone as the scammers drained her life’s savings from her Westpac bank account, A Current Affair reported.

The pensioner was still recovering from the shock of the robbery when she participated in the interview.

The scammers hit Ms Ford at the worst time possible as the money in her account was meant to help the disability-pensioner fix her car so she could travel around.

Ms Ford said she was left with just $2.67 to her name, unable to even feed her dog.

‘They might as well have broken into my house and taken everything out of there as well,’ she said.

Fortunately Westpac launched an investigation into Ms Ford’s lost funds and were able to refund her lost money.

The pensioner has urged people to be cautious when giving information online.

‘Westpac invests heavily in scam prevention and has robust processes in place to alert and protect customers,’ a Westpac spokesman said.

‘Remote access scams are the most common type of scam we see and we encourage our customers to remain alert, especially during peak periods for online shopping such as Black Friday and Christmas sales.’