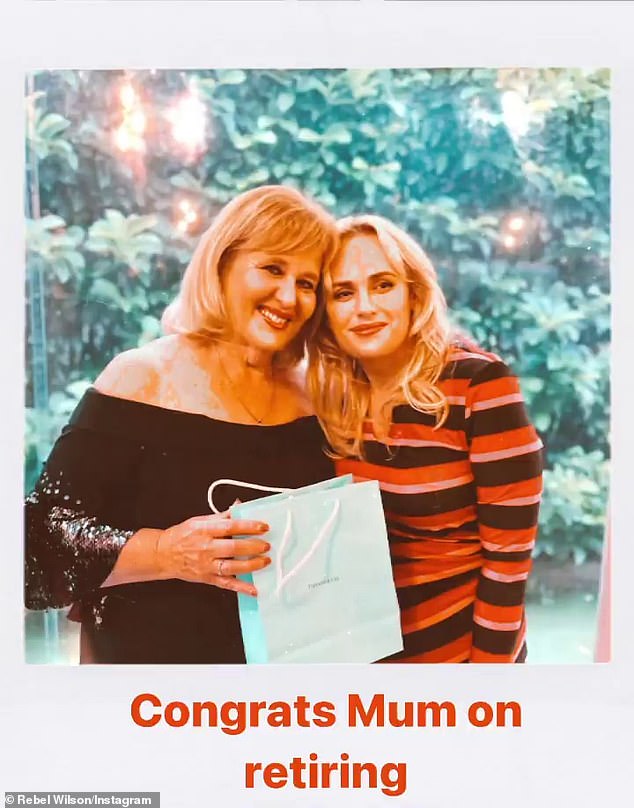 
It was a momentous affair for Rebel Wilson and her lookalike mother Sue Bownds.

The Australian actress celebrated Sue’s retirement from her long career in the education sector by gifting her a luxe Tiffany bracelet at a retirement party.

Rebel, 41, posted a series of photos with her mother at the event to her Instagram Stories on Friday.

The first picture sees Sue and her daughter together as she holds up a Tiffany bag.

The next image presents a smiling Sue sitting down at the gathering, while the last photo shows her and Rebel observing the gifted Tiffany bracelet.

Rebel and her mother have always enjoyed a very close relationship, with the Pitch Perfect star occasionally posting photos with Sue when she’s back home.

Pictures: Rebel, 41, posted a series of photos with her mother at the event to her Instagram

Generous: One photo shows the Pitch Perfect star and her mother observing the gifted Tiffany bracelet

Earlier this week, the Bridesmaids actress revealed on her Instagram that the book had found its way to a classroom at The School of St Jude in the East African country of Tanzania.

Rebel shared a heartwarming video to Instagram of Bella the Brave being read out by a teacher to the young students in her classroom.

Reach: Rebel recently celebrated her children’s book Bella the Brave being read out to school children in a Tanzanian classroom

‘BELLA THE BRAVE has made it to @schoolofstjude in Tanzania!’ Rebel, 41, captioned the post.

‘Thank you to these young gifted scholars and talented teachers for welcoming Bella into your school,’ she said.

The clip sees the teacher reading the book out to a classroom full of captivated children.

Rebel has had a long association with St Jude and has been sponsoring students from the school since 2016.

Heartwarming: The Australian actress shared a video to Instagram of Bella the Brave being read out by a teacher to the students in her classroom

In an interview with The Morning Show, Rebel revealed that the inspiration behind Bella the Brave came from her memories growing up in Australia.

‘I kind of wanted to use stories from my real life that hopefully inspire and motivate young kids everywhere,’ she told Morning Show hosts Larry Emdur and Kylie Gillies.

The Isn’t It Romantic actress added that the book, which is about ‘overcoming shyness,’ will be the first instalment in a series.

‘It will be a series of books, but this is the first one. They will be about different things,’ she confirmed before revealing the next one will be about ‘body positivity’ and the third one about ‘siblings’.

Only the beginning: The comedic actress says that Bella the Brave is the first in a planned series of books that will use experiences from her childhood