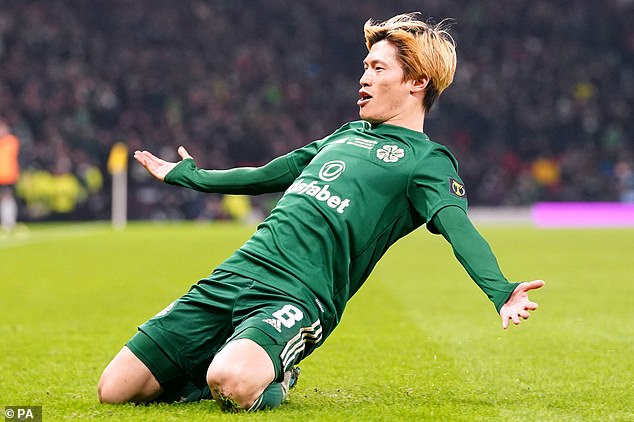 Ange Postecoglou has described Celtic and Kyogo Furuhashi as a match made in heaven.

The Japanese international striker defied a hamstring injury to score two brilliant second half goals as the Parkhead side won the League Cup for a 20th time.

Managerless Hibs shocked Hampden by scoring with their first effort on target through captain Paul Hanlon after 51 minutes.

A major pre-match injury doubt Furuhashi stunned the Edinburgh side by drawing Celtic level within 14 seconds of the restart.

And, despite Hibs protests, a quick Tom Rogic free-kick 18 minutes teed up the striker’s 16th goal of the season from a clinical lob.

A summer signing from Vissel Kobe, 26-year-old Furuhashi is fast emerging as a player of the year contender, Postecoglou saying: ‘This football club and him were a match made in heaven.

‘He’s a fantastic player but what a person. He just had it in his mind he was going to play.

‘I feel a responsibility with him because I am the one who brought him here.

Ange Postecoglou celebrated with Furuhashi at the final whistle, and then hailed the striker

‘You are bringing someone from the other side of the world and I don’t think anyone would have said he was a cast-iron guarantee to be a hit for a lot of people.

‘I knew he would be a fantastic player and he is an even better person.

‘From the moment he picked up the injury there was no way he was not going to play today, irrespective of what I was saying or the medical team were saying.

‘To have that composure in such a big game – they are two world class finishes in a big game.

‘He knows that everyone is watching him and that’s one of the challenges we had.

‘We are missing some significant talent at the moment, but these boys keep finding a way.’

Missing wingers Jota, James Forrest and strikers Giorgos Giokoumakis and Albian Ajeti, the return of Kyogo was the key to Postecoglou’s first trophy as Celtic manager.

Furuhashi (L) and Postecoglou (C) held up the trophy, Celtic’s first of the season, at full-time

Close to securing more J-League signings when the January window opens the Parkhead boss believes Kyogo is the best possible advert for fishing in the Japanese pool.

‘Japanese players in general have had a great deal of success on the continent. They have had fantastic careers in the Bundesliga and places like Holland and Italy. They have good pedigree and one or two have had great careers in the Premier League. I guess I have that added advantage and when I took over I was definitely going to use that.

‘Kyogo was always going to be my first pick because I had witnessed at first hand what sort of player he was. I had no doubt he would be successful.’

Midfielder David Turnbull became the latest hamstring injury when he limped from the pitch after 26 minutes. In a thrilling second half Hibs took the lead through Paul Hanlon and had a raft of chances to equalise, Kevin Nisbet hitting the post as Hanlon and Ryan Porteous came up against an inspired Joe Hart.

Thrilled to win a trophy so soon after a chaotic start to life in Glasgow Postecoglou admitted: ‘This football club cannot go two or three years without success and I knew that with me accepting this position that was the expectation. I wanted that when I accepted the role.

‘You can’t guarantee success but I was determined that that was the goal and it wasn’t going to take me any length of time to get there. I wanted to get there as soon as possible because that’s the expectation on any Celtic manager.

‘I’m usually pretty good, but I’m struggling to find the words this time.

‘Pretty much from the day I walked in the door we’ve had some sort of challenge in front of us.

‘Almost on a daily basis we had to sort of overcome stuff.

‘We’ve always found a way to do that and haven’t made excuses or allowances and really believed in sort of what we were trying to build here.

‘Every time you thought, ‘this is too much, how do we overcome this?…

‘Even today, first time they are in our box they score and you’re thinking ‘here is another one…’

‘But the response has been what it has been since the moment I arrived.

‘Just like any other Celtic manager you don’t rest on your laurels. The expectation is that you get up tomorrow morning and you work towards the next one.’

Seven points behind Rangers in the Scottish Premiership with a game in hand, Celtic face a tricky away game at St Mirren on Wednesday. Optimistic the Premier Sports Cup can be a springboard for more success after defying early expectations he added: ‘Look, without sounding arrogant, I have never doubted myself or wavered in my own self belief.

‘All of you were probably running a book on how long I’d last. A few of you probably had December, but that’s now gone out the window. But that’s fair enough.

‘It just didn’t affect me and that’s not arrogance. I’m just really passionate about what I do. I have been passionate about this since I was a little kid and I feel a real certainty about how I want to do things.

‘That’s the bit I love. That’s what gets me going. When it’s all smooth, I get really irritated. I have moved on in every job I’ve had after I’ve had success because I’ve felt ‘well, what’s the next challenge?’