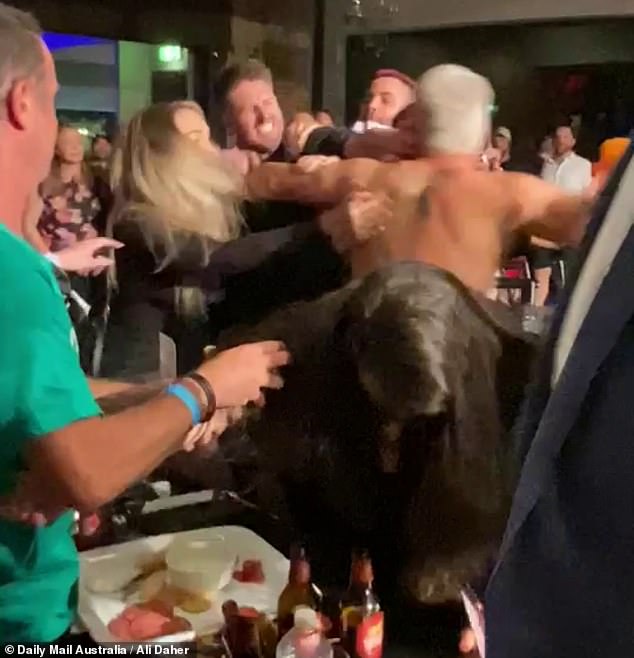 Celebrity agent Max Markson has brushed off the drama surrounding the clash between his clients, Married at First rivals Bryce Ruthven and Sam Carraro.

Markson, who represents both Ruthven and Carraro, downplayed the incident that took place at the Team Ellis boxing event on Friday night.

‘It’s over. Everyone has cooled down,’ he told Daily Mail Australia on Sunday.

Fight club: Married At First Sight rivals Bryce Ruthven, (left) and Sam Carraro (right) erupted in a violent punch up after exchanging barbs at a boxing match in Melbourne on Friday evening

‘Sam was over excited and just got caught up in the heat of the moment,’ he added.

Bryce and his fiancée Melissa Rawson had earlier on Saturday responded in a video after Friday night’s violent confrontation.

Bryce and Sam exchanged barbs at the boxing event in Melbourne before getting into a vicious punch up.

It’s over! On Sunday, celebrity agent Max Markson (pictured) brushed off Friday night’s incident involving his clients, Carraro and Ruthven, and said that they’ve both ‘cooled down’

Bryce, 32, and Melissa, 32, recorded a video and shared it to Instagram to explain their side of the story before and during the fight.

‘So you’re probably all seen last night some videos of a boxing event here in Melbourne,’ the former radio host began.

‘So Sam (Carraro) has won his boxing fight, we were at the fight. He was saying all this stuff like f**king gonzo, f**king Bryce, p**sy, all this sort of stuff.’

Moving on: Speaking to Daily Mail Australia, Markson said: ‘Sam was over excited and just got caught up in the heat of the moment’

The former Married at First Sight groom claimed he ‘never wanted to fight the guy’ and has ‘no interest in a boxing match’.

‘I’m a lover not a fighter. I’m more interested in my partner and twin boys,’ he continued. ‘We’re allowed to have a night out and go and celebrate Christmas like anyone else is doing for work parties or with their friends.’

Melissa chimed in and explained that there was a ‘verbal exchange’ between Bryce and Sam throughout Sam’s fight with Love Island star and former AFL player Todd Elton.

Fight club: Bryce and Sam erupted in a violent brawl after exchanging barbs following the Whatever It Takes match in Melbourne on Friday evening. Ruthven is pictured with fiancée Melissa Rawson arriving at the event

‘He stood there, I went up to the rope, things happened. He then had a second bite and came underneath the rope cause when Liss stood up, basically put her in danger.’

Melissa added: ‘I put my hands up to prevent the situation from escalating and pushed Sam back’.

Bryce claimed that he never threw a punch during the scuffle but Sam ‘threw multiple punches, or tried to,’ but none connected.

Their side: Bryce, 32, and Melissa, 32, have since recorded a video and shared it to Instagram to explain their side of the story before and during the fight

‘The fact that he had a closed fist around a woman is just disgusting behaviour. We all saw what he’s like, the guy’s a bully.’

‘He’s interested in creating this publicity, persona, that there’s some feud. I’ve got no interest in it. I don’t have anything to do with him literally outside of a TV show,’ he added.

Bryce and Sam were caught in a scuffle as several bystanders, including their MAFS co-star Steve Burley and Bachelor In Paradise star Jamie Doran, pried them apart.

Melissa stepped between the men as they attempted to throw punches.

Feud: Bryce and Sam were caught in a scuffle as several bystanders, including their MAFS co-star Steve Burley and Bachelor In Paradise star Jamie Doran, pried them apart