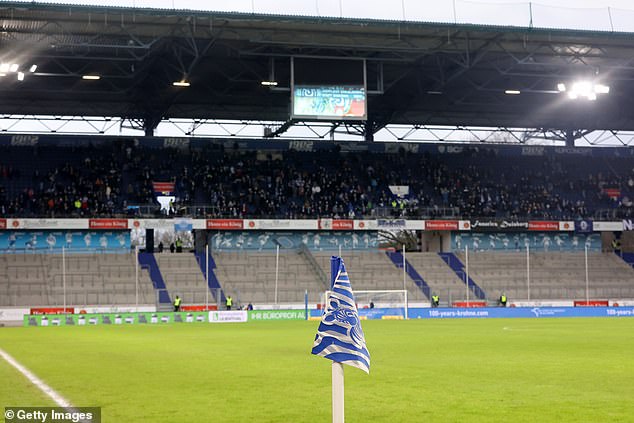 A German third division side walked off the pitch on Sunday after one of their players suffered racist abuse by an opposition fan, leading to the game being suspended.

The match between MSV Duisburg and visiting team VfL Osnabruck was stopped in the 33rd minute when Aaron Opoku, on loan at the away side from Hamburg, was the victim of a racist remark by a home supporter.

Opoku’s team-mates then refused to play the remainder of the fixture at the MSV Arena in solidarity with the player, leaving the match to be abandoned.

The fan was identified by stadium officials in Duisburg and was ejected from the ground, as the home fans chanted ‘Nazis Out’ as they joined in solidarity with Opoku, 22.

Duisburg’s stadium PA announcer then played anti-fascist song ‘Schrei nach Liebe’ as they continued in displaying their disgust at what one of their own supporters told the German player, who is from Ghanaian descent.

A VfL spokesperson revealed that Opoku was mentally distraught by the alleged remark but praised Duisburg’s response to the incident.

VfL press officer Sebastian Ruther told Magenta Sport after Sunday’s game was suspended: ‘I only heard it from above, but it quickly became clear what it was all about.

‘It is clear that there were racist remarks and our player Aaron Opoku is mentally quite down. The important thing is that it’s about Aaron. It’s crucial for us that he’s not doing well.

‘There was incredible solidarity in the stadium, also from the Duisburg spectators.’

Opoku (left), 22, was distraught by the remark and his team-mates walked off in solidarity

‘The DFB (German Football Association) has to decide with its authorities what is right. We would like to play a replay or something like that.

‘Racism must not be part of our society and also not part of football. Aaron is very, very exhausted and that was also a reason to say that we are no longer player. We just don’t accept that as a club.’

A Duisburg spokesperson described the event as the ‘lowest point in our club’s history’ and that the home side completely understand why Opoku does not want to carry on.

Duisburg president Ingo Wald slammed the actions of the fan responsible for the racist abuse after the match was suspended.

‘I was standing far away (from the incident), I didn’t notice it,’ said Wald. ‘What I’ve heard now appals me. I don’t even know how to describe my mood.

‘That (fan) doesn’t correspond to our values ​​and you don’t want to see scenes like this in any stadium, especially not in ours.’

Referee Nicolas Winter revealed that he spoke to Opoku to offer his support to the abused player.

‘We’re going to write a special report,’ said the official. ‘We are all shocked. Something like that is very dramatic in already difficult times.

‘I was in the changing room and spoke to the player. I told him that it was very important to us to protect him.’

The incident in Germany’s third division comes one day after Arsenal defender Rob Holding reported racist abuse from a Leeds United fan during the Gunners’ match at Elland Road on Saturday.

Sportsmail understands that the accusations relate to racist abuse by the Whites fan towards Arsenal substitutes Nicolas Pepe and Nuno Tavares, who were warming up next to Leeds’ West Stand.

Holding was seen speaking to fourth official John Brooks during the first-half and referee Andre Marriner stopped the match briefly to hear the Arsenal defender’s account.

Police arrested one supporter following the incident and Leeds are making a club investigation into the matter.

Holding, meanwhile, was praised by Arsenal legend Ian Wright for standing up for his players and reporting the abuse.

‘You have to applaud people like Rob Holding,’ Wright told Premier League Productions. ‘When you are being racially abused it’s very difficult to get up and do that as a black person without people coming down and piling on and saying ‘here he goes, here he goes’.

‘So for Rob Holding to get up and do that for his teammates is something for me, being in a dressing room and knowing what that’s like wanting that kind of help, that is fantastic.

‘What should happen now is he should be found, we should be able to find him because it’s there for everyone to see and he should be prosecuted and banned.’