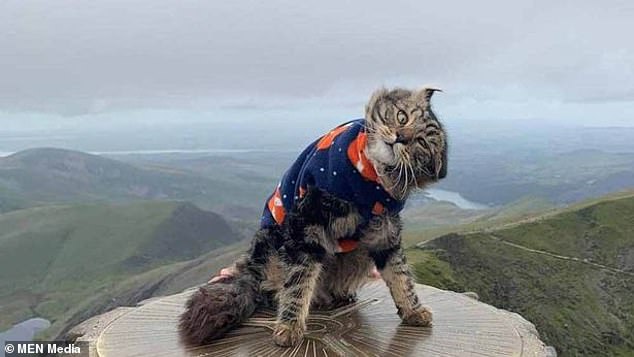 He’s a mountain rescue cat! Orion braves the elements as he climbs Wales’ highest summit Snowdon with a bit of help from his owner who took him home from animal shelter

By Gemma Parry For Mailonline


A rescue cat turned adventurer has made it to some of the highest summits in the UK with his lurcher friend and owner in tow.

Orion was rescued by veterinary nurse Katie Bowen, 31, around two years ago, after he was brought to the rescue centre she worked at having been separated from his mother.

Orion, a part Maine Coon, was just two days old when he arrived at the centre with his sister, so Katie, from Bracknell, Berkshire, took on the challenge of hand-rearing them.

‘I was a vet nurse in a rescue centre,’ Katie told The Mirror. ‘We would often get kittens brought in and I ended up with Orion and his sister. They were tiny.

‘No one knows a lot about his [Orion’s] background or even his breed.’

Orion began walking with a harness at nine weeks, so that he could accompany owner Katie on her trips. Pictured – Orion at the top of Mount Snowdon earlier this year.

She fell in love with Orion’s gentle and loving personality and with room for one kitten for company for her five-year-old lurcher, Pongo, she decided to keep him.

At nine weeks of age, Katie decided to introduce Orion to her love of rambling through the countryside, training him on a harness so that he could eventually accompany her on her adventures.

‘I thought, “I take Pongo out on all these adventures, why shouldn’t Orion be part of that?”

‘Orion even comes away on holiday. Most of our holidays are either camping or in a van. We just hit the road and off we go.

‘When we get a pitch to camp, he likes to sit up on a picnic table and surveys the whole campsite.’

In this year alone, Orion has scaled the heights of Mount Snowdon and Sugar Loaf Mountain in Wales on an eight-day trip with Katie and Pongo.

At nine weeks of age, Katie decided to introduce Orion to her love of rambling through the countryside, training him on a harness so that he could come on camping trips

‘I did have to carry him some of the way up Snowdon, but we still climbed it together,’ Katie added.

But, she revealed that Orion prefers to be closer to the ground.

‘He likes walking in woods best,’ she said. ‘Snowdon wasn’t his favourite expedition because it was a bit windy, so for some of it he hid in my cat carrier.

‘But, we did get a photo of him at the top of Snowdon and he walked some of the way and loved it.’

Orion’s adventures mean he is now unfazed by most things, and regularly accompanies Katie on shopping trips in the town centre, and has even watched the Red Arrows fly overhead.

Katie’s golden rule is keeping Orion on his lead at all times.

‘I do this for his safety, although he still gets up to mischief,’ she said.

Katie is keen to show that with the right training, cats can become walking companions.

‘I would say just pick up a harness, they are really cheap, and see if your cat accepts it,’ she said.

‘For the first walk I would choose somewhere quiet and just go at your cat’s pace. Some cats just aren’t going to want to do it, especially if you’re starting with an older animal.

‘But if your cat enjoys walking it can be an amazing experience. I really encourage feline owners to try it.’