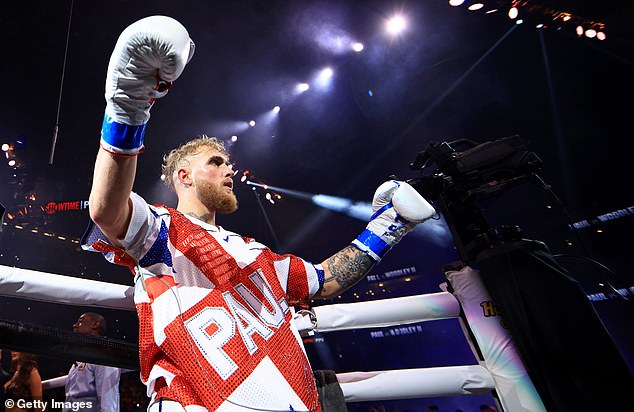 
Jake Paul has continued his verbal assault on Tommy Fury, labelling him ‘lucky he wasn’t there’ after brutally knocking out Tyron Woodley.

British boxer Fury – half-brother of heavyweight champion Tyson – was due to fight Paul on Saturday night at the Amalie Arena in Tampa, Florida, but pulled out last-minute, before UFC star Woodley stepped in at short notice for the rematch.

Paul was furious with Fury for the withdrawal, and referenced him in his inventive UK-themed ring-walk outfit.

Paul was set to fight Fury (above), but the Brit, 22, pulled out at late notice due to a rib injury

Jake Paul with a message to Tommy Fury on his UK-themed ring walk outfit: “Hey Tommy, wish you could’ve been here but watching from a TV is cool too.” pic.twitter.com/5jwQn80wvL

Printed on his red, white and blue robe were the words: ‘Hey Tommy, wish you could’ve been here but watching from a TV is cool too’.

Fury reportedly begged to fight the YouTuber-turned-boxer despite a broken rib, but was eventually forced to pull out due to injury.

Paul, 24, accused Fury of running scared and has since stated he will not give him another chance to fight.

He said after the bout against Woodley: ‘Tommy Fury is lucky that he wasn’t in there tonight, because Tyron’s way tougher and has that experience. Tommy would’ve probably looked a lot worse than that, and that was pretty bad.’

One fan agreed, taking to Twitter to suggest Fury dodged a bullet by not fighting Paul, saying: ‘seems like Tommy was the real winner this night,’ followed by a cry-laughing emoji.

Jake’s brother Logan responded to Fury’s pull-out by saying: ‘(The) kid’s missing a few screws. It’s a shame. It’s a shame. I think Tommy let down his family name and his country. I don’t have, like, nice things to say… Tommy sucks.’

But Fury’s doctor Usman Sajjad leapt to his defence, insisting he takes ‘100 per cent responsibility’ for his withdrawal.

‘Tommy was desperately wanting to fight,’ Sajjad explained. ‘He said “give me an injection a week, we’re going to do whatever it takes”, but I had to say, “no – this could be a life threatening thing”.

‘There was a risk of Pneumothorax (collapsed lung), if you get tapped there during training or the fight that’s a medical emergency. You’d be short of breath and it could lead to a cardiac arrest.

‘I take 100 per cent responsibility for pulling him out and I’m sure his dad does as well. We made the decision as a team – I gave my medical report, the scan findings and his dad pulled him out.’