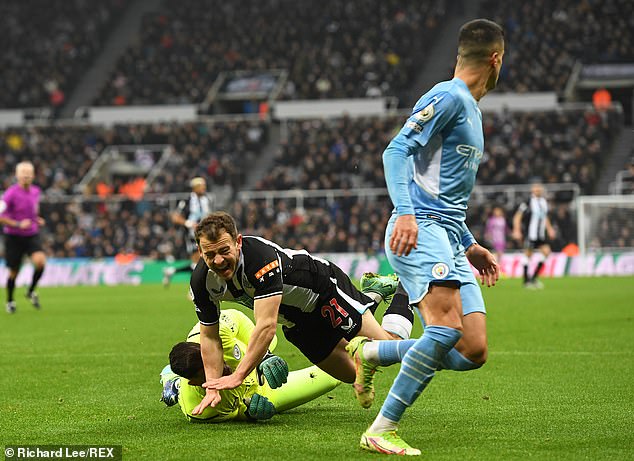 
Jamie Redknapp believes Newcastle were hugely unfortunate not to be awarded a penalty in the first half of their clash with Manchester City.

City goalkeeper Ederson caught Newcastle’s Ryan Fraser in the area, but, to the surprise of many, referee Martin Atkinson didn’t point to the penalty spot.

Redknapp was adamant that Atkinson made the wrong decision.

It emerged that VAR decided against giving a penalty due to City defender Joao Cancelo coming away with the ball; a decision Redknapp didn’t agree with.

Speaking on Sky Sports, Redknapp said: ‘That’s my idea of not knowing what’s going on. That’s just a terrible excuse. He wipes him out. That’s a foul, that’s a penalty. The referee needs a bit of help from VAR. It’s a mistake.’

Rangers striker Jermain Defoe agreed with Redknapp that it was the wrong decision.

Speaking on Sky Sports, Defoe said: ‘The goalkeeper’s come out and he’s realised that he’s not going to get the ball. If that’s outside the box it’s a foul. Of course it’s a penalty.’

Newcastle were trailing 2-0 when the incident occurred, with Ruben Dias and Joao Cancelo having scored for City.

City ended up winning 4-0 as Riyad Mahrez and Raheem Sterling scored in the second half.

Understandably, plenty of Newcastle supporters were livid with the decision, including legendary former striker Alan Shearer.

Shearer wrote on Twitter: ‘Any danger VAR or ref. Pen all day.’

One supporter wrote: ‘Mad agenda against us’.

Another added: ‘Ok so new rules are you can half anyone as long as they’re not on/near the ball’.

One fan wrote: ‘Ridiculous decision not to call a penalty there. Nowhere near the ball and stopped Fraser from challenging.’

Another wrote: ‘Now tell me there’s not an agenda against us after that brutal decision. What a disgrace. Penalty all day long.’