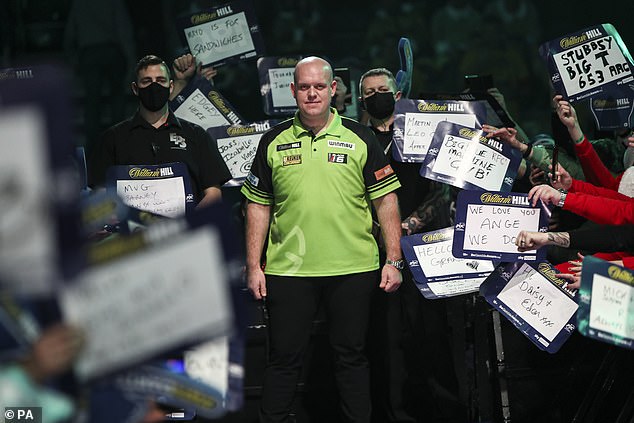 By Kieran Gill for MailOnline


Nothing has gone right for three-time darts world champion Michael van Gerwen this year but a rival’s taunts could just provide the spark to re-ignite the fire.

Van Gerwen is a man on a mission after a 12-month drought when it comes to major titles. It is his longest barren spell since his breakthrough in 2012 and this is the first year since 2014 that he is not top seed. First signs were not promising, a nervy start before beating debutant Chas Barstow in the first round. ‘I’m not really happy with the way I played,’ said Van Gerwen, who averaged 94.54 and hit six 180s. ‘I have to do better, I know that.’

But there is more to the Ally Pally agenda this year after Gerwyn Price predicted he would meet Van Gerwen in the final where he said he would defeat ‘the world’s second-best player’.

The Welshman’s mind games drew a response from his Dutch rival. ‘He’s got one thing right and that’s playing me in the final but the other thing is absolute nonsense,’ Van Gerwen snapped.

‘We all know he’s full of himself but deep in his heart, he knows if I play my game they’re all dependent on me and not even allowed to stand in my shadow.’

Van Gerwen last won the sport’s biggest prize three years ago having previously lifted the crown in 2014 and 2017.

However, the Dutchman is confident that nobody can match him when he is on song

The first round has already thrown up plenty of entertainment. Ross Smith recovered from 2-1 adrift to beat 16th seed Stephen Bunting.

‘The Bullet’ endured a nightmare start but grew into the match. Then Smith fired in a 10-darter to force a fifth and final set, before converting 167 and 102 finishes to wrap it up with back-to-back 12-darters.

Alan Soutar made it a trio of debutants to go through after beating Brazilian star Diogo Portela in another five-setter.