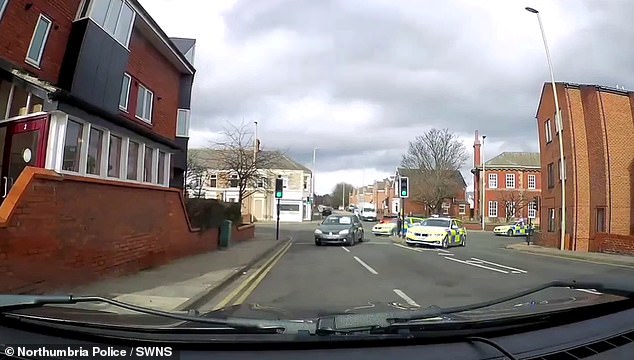 You must be SKIDDING! Police release shocking dashcam video of nail-biting near-misses after string of reckless motorists are convicted


Shocking footage released by police shows a series of terrifying near-misses after a string of motorists were convicted as part of a dangerous driving clampdown.

One car can be seen breaking suddenly along a dual carriageway causing a van has to swerve out of the way.

Others are seen dangerously overtaking on the wrong side of the road while one motorist inexplicably stops in the middle of a busy road to change direction.

The video was released by Northumbria Police as part of a dashcam initiative project which has won them a Pride in Policing award.

The project involves members of the public submitting footage which they’ve captured on their dashcams and handing it over to cops.

It has seen instances of speeding, dangerous manoeuvres and close encounters followed up by the force after being caught on camera.

More than 7,200 incidents have been reported to the force since the project was launched in 2018.

Over 4,300 of those have resulted in a fine and 14 drivers have seen their licences taken off them and banned from the roads.

PCs Daryl Phillips and Mark Heavisides are two of the driving forces behind the scheme.

PC Phillips said: ‘By working with the public who are on our roads every day we’re able to take more action against those putting themselves and others at risk by their dangerous actions.

‘I would like to thank the members of the public who have contributed to the success of the project – without you submitting the footage this simply wouldn’t work.

A driver of a white car used his breaks suddenly, causing the vehicle behind to ram into it and forcing a white van to swerve into the inside lane

A crimson-coloured car driving at a fast speed overtakes, causing oncoming traffic to come to a stop to avoid a collision

‘Please do keep sending in your clips – you really are helping to make a difference.’

PC Heavisides added: ‘Not only does the initiative help keep communities safe by taking action against those who have driven inappropriately, it also helps deter people committing offences in the first place as they know anyone could be watching.

‘I urge everyone to take care on our roads and drive responsibly – the consequences of not doing so can be devastating.’

A white car speeds past on a road in Northumbria, narrowly avoiding a speed control measure

Chief Constable Winton Keenen added: ‘As times change and technology evolves, so must the way we police and the way in which we keep people safe.

‘This is a fantastic example of how we are working side-by-side with our communities to do just that.

‘I would like to congratulate the Dashcam Team and the public who have all contributed to the successful initiative we see today.

‘As a force we will continue to innovate and look for new ways of working in order to deliver the very best service possible to the communities we are privileged to be a part of here in the North East.’