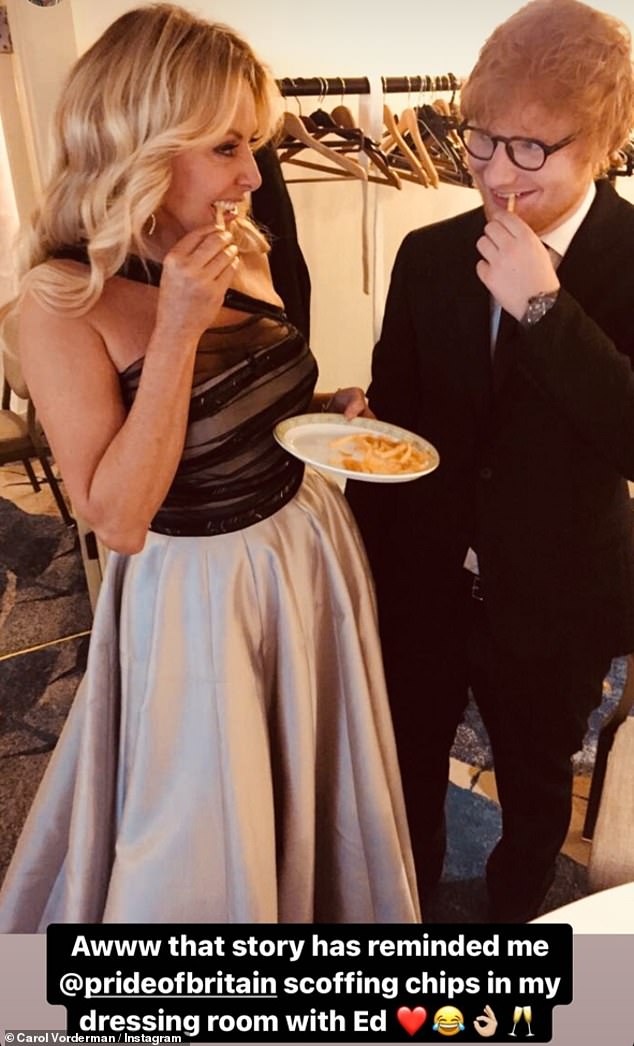 
Carol Vorderman delighted fans as she shared a funny throwback scoffing chips with Ed Sheeran at the Pride of Britain Awards.

The TV presenter, 60, looked sensational in a billowing black and silver gown while catching up with Ed at the event, which took place in October.

With her wavy highlighted shoulder length locks falling loosely over her shoulders the former Countdown presenter looked incredible as she chatted with the Shape Of You singer, 30.

Snack time: Carol Vorderman, 60, took to Instagram to share this cute throwback picture of her eating a plate of chips with singer songwriter Ed Sheeran, 30 on Monday

Ed looked dapper in the throwback, sporting a black tuxedo and matching pants combo which he paired with a crisp white shirt and black tie.

Carol captioned the image: ‘Aww that story has reminded me of @prideofbritain scoffing chips in my dressing room with Ed Sheeran.’ She closed the caption with the love heart, crying face, champagne and perfect emoji.

The cute images come after Carol revealed that she has bid farewell to her luxurious Bristol home – Sloblock Hall – in an emotional Instagram post.

Looking good: The former Countdown presenter also shared a snap from the event cosied up to a friend

Sharing a series of palatial photographs with her followers, she described herself ‘as lucky woman’ who ‘had a blast’ in the property.

The impressive series of snaps showed the former Countdown host posing in the modern kitchen and by the pool’s edge, which boasted a diving board.

In additional shots, fans were given a preview of the recently refurbished 1970s property and were bound to be impressed by both the exterior and interior.

A reflective Carol penned: ‘SLOBLOCK HALL Goodbye my happy place….. So many wicked parties…..so so many brilliant memories. I’m a lucky woman ❤️❤️

‘And now I’m moving on to yet more new adventures. Wishing the new family who call you home now every happiness and health and laughter ❤️❤️Cheers SLOBLOCK We had a blast’.

The mother-of-two also marked selling the property she ‘kinda built 15 years ago’ with a throwback Countdown spoof which provided the inspiration for the name Sloblock Hall.

Sold: Carol recently revealed that she has sole her luxurious Bristol home

She encouraged her followers to ‘Watch this clip of @stephenfryactually and Hugh Laurie and the first EVER spoof of Richard Whiteley and I.’

The video showed the Carol impersonator placing BOLLOCSK on the letterboard, yet the obvious colourful language isn’t offered when the 30 second timer goes off.

Carol explained in a lengthy caption:  COUNTDOWN STORY Today I sold and said goodbye to a house I kinda built 15 years ago….the house of a thousand parties ❤️❤️ I named it SLOBLOCK HALL….cos of my theory on life….

‘Watch this clip of @stephenfryactually and Hugh Laurie and the first EVER spoof of Richard whiteley and I. Selection = BOLLOCSK and nobody gets the answer. Full video on you tube https://youtu.be/9X1cKMKcHmg SLOBLOCK became our Countdown swear word after that…❤️❤️

‘So I named my home after it Life and ego and showbiz and taking yourself too seriously…. SLOBLOCK HALL Meaning It’s HALL B******S.

‘Here’s a pic of the house sign to prove it. Never thought I’d get the name past the council naming committee but I did cos I didn’t tell them what it meant !!!! Life’s too short. Made me laugh every time I went through the gates More pics in next post ❤️❤️ #housesale #home.

Former home: The impressive series of snaps showed the former Countdown host posing in the modern kitchen and by the pool’s edge, which boasted a diving board