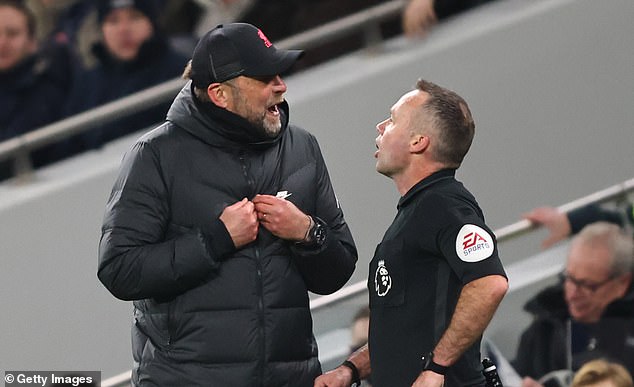 Former Premier League referee Keith Hackett blasts Paul Tierney’s controversial decisions in Liverpool’s draw against Tottenham, claiming there is ‘no accountability when big errors are made’ by officials


Referee Paul Tierney should have sent Harry Kane off in Tottenham’s 2-2 draw against Liverpool, according to former Premier League referee Keith Hackett.

Spurs and Liverpool played out an entertaining, ill-tempered four-goal thriller at the Tottenham Hotspur Stadium on Sunday, with Tierney under the microscope and widely criticised after making several highly controversial calls during the match.

And Hackett blasted the referee for his performance, before claiming there is ‘no accountability when big errors are made’.

Former Premier League referee Keith Hackett has blasted referee Paul Tierney (right) for his showing in Liverpool’s 2-2 draw against Tottenham, in which he made several contentious calls

He said: ‘How can Harry Kane stay on the pitch after that reckless challenge that endangered the safety of an opponent?

‘Excessive force. Serious foul play challenge, red card, another refereeing error. It is a lack of accountability when big errors are made. No apology, no explanation, carry on boys you can do what you want!

‘How can he defend a player who is out of control, uses excessive force? Why doesn’t VAR suggest a look at the monitor to help the referee? That’s what it is there for.

Klopp said the challenge was ‘definitely’ worthy of a red card, and wanted VAR to intervene

Diogo Jota went to ground inside the penalty area, but no penalty was given in the first half

‘VAR rightly advises referee Tierney to review the red card for Robertson of Liverpool who is correctly sent off. Why didn’t VAR do the same on the Kane challenge? Both were red card offences.’

Liverpool were aggrieved with several calls not going their way, including Harry Kane escaping a red card for a slide tackle on Andy Robertson, Diogo Jota not getting a penalty after an Emerson Royal challenge in the box and Robertson’s red card.

Reds manager Jurgen Klopp furiously stormed onto the pitch after the game to confront Tierney, saying: ‘Honestly, I have no problem with any referees, only you. You don’t give us this penalty – you have never played football’.

In his post-match press conference, the German added: ‘I really have no idea what his problem is with me. Honestly, I have no idea. I have no problem… you just need an objective ref who sees the situations and judges them and not opinions.’