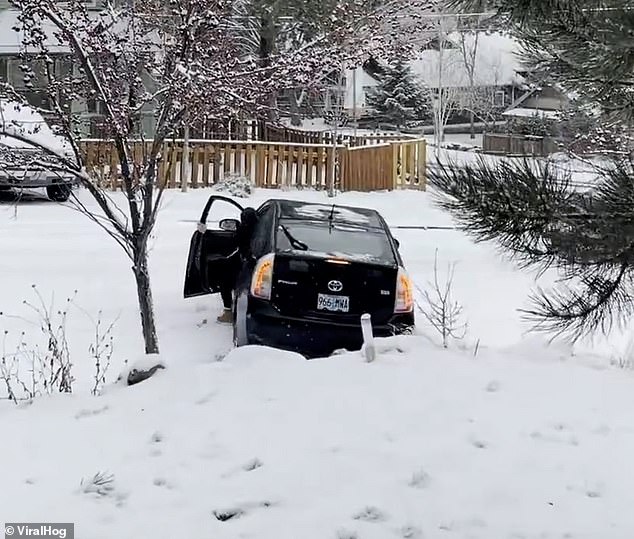 ‘I don’t want to be here!’ Terrified driver screams for help as her Prius slides backwards down a snowy hill before being hit by another car


This is the moment a driver panicked as her car slid backwards down a snowy hill before being hit by another out-of-control vehicle.

Footage shot in Bend, Oregon, shows a black Prius rolling downhill, unable to get a grip on the snowy surface.

With the door half open, the scared driver seems to be considering jumping clear of her car as it continues disobeying her commands and comes to rest at a right angle across the road.

She screams and yells: ‘I don’t know what to do!’ as the woman behind the camera and other onlooker tell her: ‘Stay in your car.’

The driver of a black Prius lost control of her vehicle on a snowy hill in Bend, Oregon, before almost being run over by a vehicle that did a 360-degree spin as it tried to brake on the hill

The camera cuts to a second vehicle, which is coming down the hill at speed.

It suddenly brakes and spins 360 degrees, hurtling all the while towards the marooned Prius and its driver – who appears to have got out of the vehicle.

‘Get in your car!’ warn a woman and a man from the side of the road repeatedly, as the second out-of-control vehicle threatens to run her over.

The second vehicle rear-ends the stationary Prius, shunting it forward and revealing the frightened woman driver crouching in the snow.

The second car spins towards her as she yells: ‘I don’t want to be here!’ but it stops before hitting her.

The black Prius’ driver is seen at the end of the video on her knees in the snow, shouting despairingly: ‘I don’t want to be here!’ after losing control of her vehicle and almost being run over within a short space of time

The scene unfolded on December 15, after parts of Bend, Oregon, received substantial snowfall following temperatures that plunged as low as 25°F.

Bend has since thawed out, with today’s forecast reaching highs of 45°F, although with more snow predicted for later in the week.

Similar scenes were captured by a dashcam in Post Falls, Idaho, on December 6, when a driver went hurtling toward a ditch in snowy conditions – but recovered remarkably.

The footage shows the Subaru driver lose control of their Outback estate after turning onto the I-90.

The Subaru drives onto some snow at the edge of the carriageway, dramatically reducing the amount of grip available, sending it hurtling towards a roadside ditch.

The motorist gets into trouble after turning left from Hwy-41 onto the I-90.

Luckily for the driver, the car’s four-wheel drive system allowed it to return to the carriage way.

However, once back on the road, the driver turns the steering wheel too quickly and again loses control of the car and again drives off the carriageway down into the gully beside the road.

Again the car is able to drive on the snow-covered grass and return to the carriageway without any further incident.