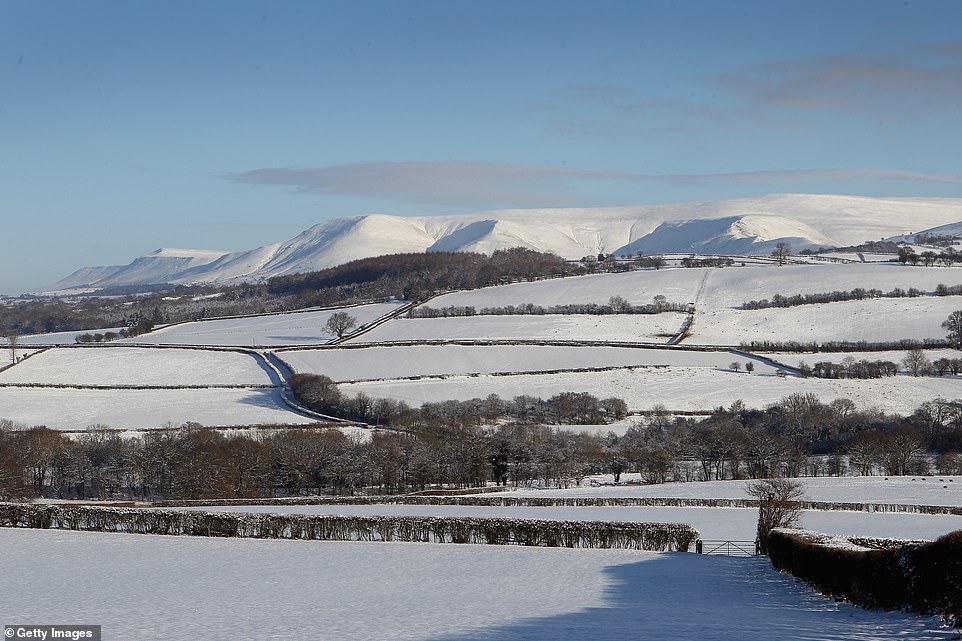 
Chances of a white Christmas for some parts of Britain are growing, as forecasters keep a close eye on a looming ‘battleground’ of icy Arctic air and milder, wetter conditions.

After a gloomy and foggy weekend saw the coldest night of the winter so far, with temperatures plunging to -9.1C (15.6F) in Braemar in the Cairngorms last night, today and tomorrow are set to be brighter for many.

But from Wednesday, it is expected to turn chillier again, just ahead of the onset of wetter air from an area of low pressure moving in from the Atlantic, which is expected lead to snow in upland areas going into Christmas Eve.

The Met Office added that this could potentially even spread to low-lying parts of the Midlands, northern England and Scotland, and that motorists travelling this week before should ‘prepare for icy, wintry conditions’.

Bookmakers Coral and Ladbrokes both have Edinburgh odds-on for a white Christmas at 4-5, while Newcastle is evens, Birmingham 6-4, London 7-4 and Cardiff and Belfast both 2-1.

Snow covers the Black Mountains in the Brecon Beacons in Wales on Christmas Day in 2010. The last time there was snow across much of the country on December 25 was that year, when 83 per cent of weather stations reported lying snow

Met Office meteorologist Annie Shuttleworth said: ‘From Wednesday evening we will see wetter, milder conditions for southern and western areas, while to the north it will remain cold and bright.

‘It’s at the boundary between the two that we could see a risk of snow through Thursday and Friday. But there remains a great deal of uncertainty about exactly when and where.

‘Any significant snowfall is likely to be on higher ground, but anyone travelling in the run-up to Christmas will need to prepare for icy, wintry conditions.’

She added:  ‘We could see some snow showers over the hills in northern parts of the UK – it’s probably the most likely place to see any snow. You couldn’t rule out some sleety snow further south than that, but there’s a really big question mark on it.’

BBC forecaster Sarah Keith-Lucas described it as a ‘battleground’ with ‘cold air spilling in from the north, milder air heading in from the south-west’ as the festive weekend approaches.

BBC Weather is currently forecasting that London could have temperatures of 52F (11C) on Christmas Day.

The day could also see further snow showers to northern hills, but forecasters are not expecting disruptive amounts of wind.

The last time there was snow across much of the country on December 25 was in 2010, when 83 per cent of weather stations reported lying snow.

That was only the fourth time since 1960 where that has happened in at least 40 per cent of UK locations.

Today and tomorrow are expected to remain largely dry with more bright spells than over the weekend. But nights will remain frosty, with temperatures plunging as low as -2C (28F) tomorrow even in the South.

The outlook for after Christmas is currently for another spell of high pressure, bringing a return to settled, cold and dry conditions.

On Saturday night, Braemar in the Cairngorms reached -8.9C (16F) making it the coldest night of the winter so far. This was then beaten again in the same location last night with a low of -9.1C (15.6F).