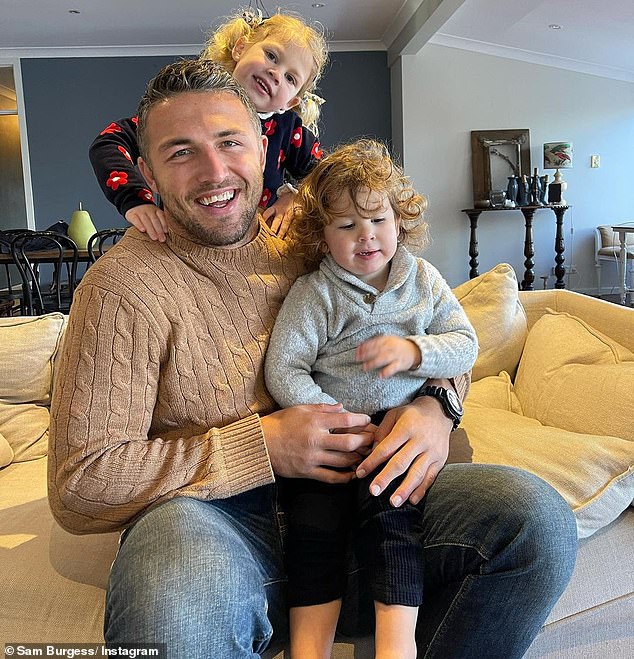 
Sam Burgess is unlikely to return to NRL side South Sydney in the immediate future after revealing he has been approached to take a spot on England’s coaching staff for next year’s World Cup.

Burgess, 33, has been sidelined since he was stood down as South Sydney assistant coach in October last year.

It came amid allegations the Rabbitohs covered up substance abuse and violence surrounding the retired forward.

The NRL says its integrity unit is currently finalising its investigation after the conclusion of a NSW Police probe into the premiership-winning forward from 2014.

NSW Police did not proceed with a prosecution saying the forward had no case to answer.

Burgess, 33, is weighing up an offer to help coach England at the 2022 World Cup – and has already committed to coach Group 2 bush footy in NSW with Orara Valley next year

He also had a conviction for intimidating his former father in law overturned on appeal.

But rather than returning to the club where he made his name, Burgess claimed he was happy cutting his teeth as a head coach with the Orara Valley Axemen in NSW Rugby League’s Group 2 competition next year.

‘I’ve yet to make a decision,’ he told AAP from the Jack Newton Classic in the Hunter Valley.

‘At the moment I’m happy where I am. I think I’ll learn a lot more doing what I’m doing at the moment.

‘I do have an ambition to be back there. I’ve just got to take my time, learn my trade and have some fun. I’ve got no real path just yet.’

Burgess will relocate to the region, in the Northern Rivers district of NSW, to take up the coaching position and will travel back to Sydney to see his children.

At an elite level, Burgess said he had been in dialogue to link up with Shaun Wane’s England squad for next year’s World Cup.

‘I’ve got an interest to coach with England,’ he said.

‘I’m good friends with Shaun and he’s interested in having me around for the end of the year to do some of the defence stuff.

‘It would be a good start, being on the England staff would be interesting because it’s not a year-long thing.’

Sam Burgess became a legend in the eyes of many footy fans after leading South Sydney to the NRL premiership in 2014 (pictured, with his mother Julie)