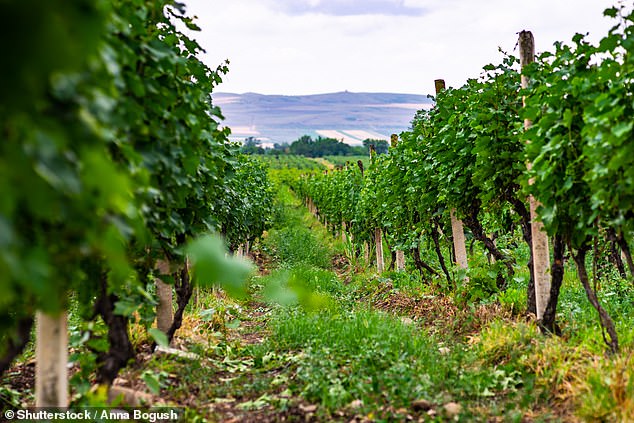 Forget France, Italy and Spain – the grapes used to make top European wines may be from the west-Asian country of Georgia where vineyards have existed for 8,000 years, study suggests


The grapes used to make popular French, Italian and Spanish wines may not be from Europe but instead from the Western Asian country of Georgia, a study has suggested.

Italian scientists analysed 204 genomes of common grape vines in Georgia and found that evidence to suggest that a single ‘domestication event’ occurred in Western Asia.

The experts found that the birth of the grapes used in wines such as Sauvignon Blanc, Merlot, Chardonnay and Pinot Noir took place during that event, which was followed by numerous and pervasive interbreeding with grapes from Georgia and Europe, reports The Times.

The grapes used to make popular French, Italian and Spanish wines may not be from Europe but instead from the Western Asian country of Georgia, a study has suggested. Pictured: A vineyard in Georgia

The grapes were dispersed from West Asia to Europe in a move driven by human migration and maritime trades.

The findings differ from other theories which suggest that the European wines came from wild grape species on the continent without interbreeding with grapes from Western Europe.

Georgia has boasted that it has been making wine for 8,000 years – longer than any other nation – since archaeologists found traces of wine residue in ancient clay vessels.

The research, published in the journal Nature Communications, also ‘identified the genetic footprints for domestication and breeding selection, which determine the grapes used for today’s wine making,’ reports the newspaper.

‘The authors observed similar levels of genetic diversity in wild grapes and in the varieties used for today’s wine making,’ the study by Italian scientists Michele Morgante, Gabriele Di Gaspero and colleagues added.

In 2017, scientists discovered that people in Georgia were drinking ‘mind-altering’ wine 8,000 years ago.

The archaeological evidence pushed back the origins of wine 1,000 years to the Neolithic period, when humans were still using stone tools.

Previously the oldest known traces of wine dated to about 5,000 BC and were recovered from the Zagros mountains of Iran.

Scientists from the University of Toronto and the Georgian National Museum believe the practice of crushing grapes to produce a heady alcoholic drink started up to 1,000 years earlier in the South Caucasus region between eastern Europe and western Asia.

State-of-the-art methods of chemical extraction revealed tartaric acid, and the organic acids malic, succinic and citric, the researchers reported in the journal Proceedings of the National Academy of Sciences.

Dr Stephen Batiuk, a member of the team from the Department of Near and Middle Eastern Civilisations at the University of Toronto, said: ‘We believe this is the oldest example of the domestication of a wild-growing Eurasian grapevine solely for the production of wine.’

The excavated sites contained the remains of two Neolithic villages at Gadachrili Gora and Shulaveris Gora.