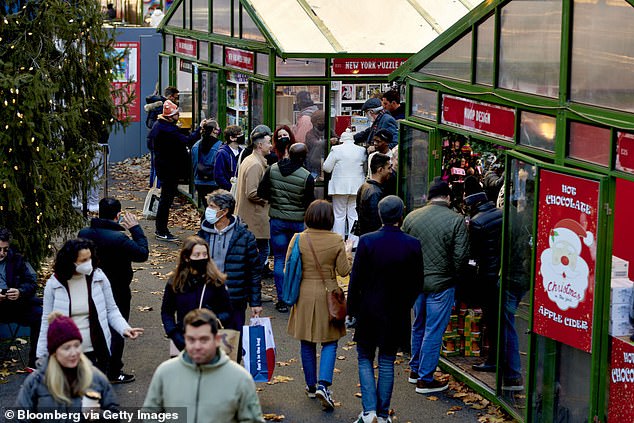 US economy unexpectedly GREW by 2.3% with a surge in consumer spending and businesses rebounding: Fears Omicron Christmas surge could push back the recovery

By Morgan Phillips, Politics Reporter For Dailymail.Com and Associated Press

The third-quarter growth in the nation’s total output in goods and services significantly slowed from the first two quarters where growth soared to 6.3% and 6.7% respectively.

GDP growth is adjusted for inflation, which has also soared this year – the Consumer Price Index was up 6.8% in November over last November.

The emergence of the delta variant was blamed for the slowdown in Q3, which runs July 1-Sept. 30.

And with the spread of the Omicron variant and lingering supply chain issues, there are concerns growth could slow again heading into 2022.

On Wednesday, President Biden convened a meeting of his supply chain disruptions task force virtually and in-person in Washington, where he touted what he said was significant progress in alleviating bottlenecks at the ports and other issues that had created shortages of goods and contributed to higher prices for consumers.

Biden said that retail inventories are up 3% from last year and on-shelf availability for products is at 91%, close to where it was before the pandemic.

‘Packages are moving. Gifts are being delivered. Shelves are not empty,’ Biden said.

The faster-than-expected growth for Q3 came as consumers spent more than what was previously thought and businesses were able to rebuild inventories more quickly.

Biden said that retail inventories are up 3% from last year and on-shelf availability for products is at 91%, close to where it was before the pandemic

Wednesday’s report showed that consumer spending, which accounts for two-thirds of economic activity in the US, was up 2% in the third quarter, down from a 12% surge in the April-June quarter.

Economists expect GDP growth to come in about 5.5% this year, which would be the fastest growth since 1984 and would reverse last year when the economy shrank by 3.4% as 22 million jobs were wiped out.

Most economists agree that 2.5% to 3.5% growth in GDP per year is the most the US economy can maintain without having negative effects with inflation.

Oxford Economics has trimmed its forecast for economic growth for the current quarter from 7.8% to 7.3%, which would still represent a sizable rebound from the third-quarter slowdown.