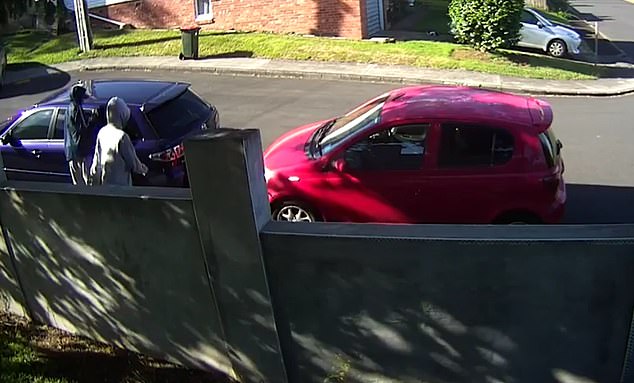 
Two children have been caught red-handed trying to steal a car from outside its owner’s home in broad daylight.

A witness described the scene that was caught on CCTV in Auckland as similar to a ‘training exercise’ about 5.30pm on Tuesday.

The two male youths tried to get into the car, then fled the suburban street and jumped into a getaway vehicle.

‘I was in disbelief. I was watching it live. That’s when I headed straight down the driveway,’ Ian, the car’s owner, told the New Zealand Herald.

‘They must have caught me in their wing mirror because they were out of there pretty quickly. They wouldn’t have been much older than 13 or 14.

‘As they were driving away, we eye-balled each other. There were at least two others in the car as well as the two who got out and attempted to steal my car.’

Police later confirmed the getaway car was stolen, with the driver believed to be a woman aged in her 40s.

The shocked vehicle owner (pictured left) watched on in disbelief initially, before confronting the getaway driver – the youths fled the scene on foot (pictured, above right)

It is unknown how the middle-aged woman knew the handful of teenage would-be thieves.

Auckland City East Police Inspector Jim Wilson said the video was a stark reminder that thieves could strike at any time – and that the festive season was also a common time for break-ins.

He added that car thieves were often opportunistic and securing vehicles made them harder to steal.

Tips on how to keep your car safe from thieves: