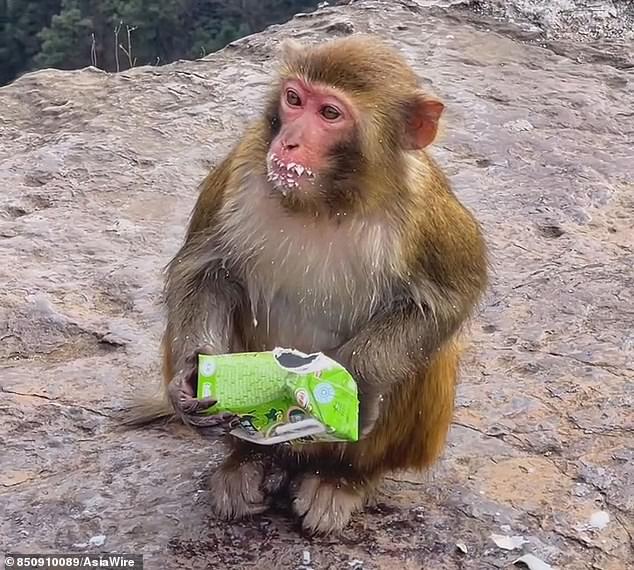 
This is the moment a cheeky monkey ran up a woman’s leg to steal a milk carton from her pocket in a park in China.

Footage shows the unsuspecting tourist admiring the view at a scenic spot when the monkey jumps on her and grabs hold of her thigh.

The clip was recorded in the Zhangjiajie National Forest Park in the south-central province of Hunan on Tuesday, December 21.

In the video, the sneaky animal is seen ripping open the carton of milk while it is still inside her pocket, causing it pour out onto the floor.

The monkey then glugs the milk from the woman’s pocket as it holds onto her jacket and balances on her leg.

The woman lets the monkey have its fill, and the cheeky chap is later seen holding the carton on the ground after apparently drinking it dry.

The monkey climbs down onto the ground and sits innocently with the empty carton in its hands.

In the video, the sneaky animal is seen ripping open the carton of milk while it is still inside her pocket, causing it pour out onto the floor

The woman later said that the monkey initially made her jump, but did not hurt her, adding that she let it keep the drink and remembered to discard of the carton afterwards.

Another Forest Park visitor, who was not named, was quoted as saying: “The monkeys are very pushy! They will just grab something if you don’t give it to them.”

After the video was widely shared on social media, a park spokesperson reminded visitors to always remain vigilant when encountering monkeys at scenic spots.

They also said that visitors should not feed or tease the animals, as they could become aggressive.